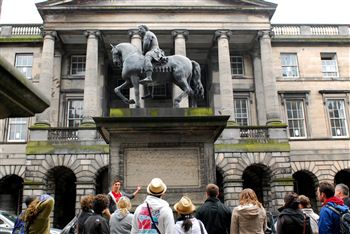 AN historic Scots monument is to get a £50,000 hip replacement to save it from collapse.

Edinburgh’s oldest statue, the effigy of King Charles II on horseback, has been battered by over 300 years of heavy Scottish weather and needs urgent work.

Rainwater has seeped in through cracks causing crippling damage on one side of the Parliament Square sculpture, erected in the heart of the capital’s Old Town in 1685.

Experts compared the refurbishment work to a keyhole surgery operation on Charles II’s hip and put a contract for the job out for tender this week.

The operation could also reveal another secret, as conservationists believe the lead structure’s internal oak framework could confirm the theory it was constructed by Dutch master sculptor Grinling Gibbons.

Only once they cart the statue away and begin work will they discover the truth. 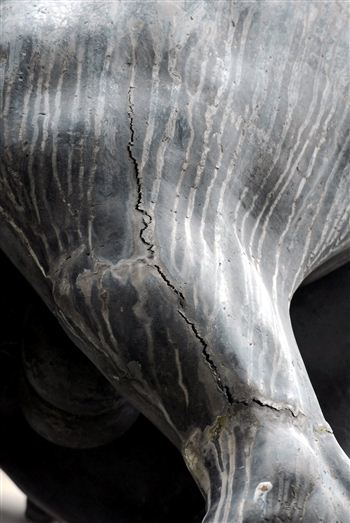 The six-month repair job will see the statue removed to a workshop and fully restored under a strict code of ethics to minimise any further damage.

Leading the fundraising campaign for Charles II’s hip operation – which is half-way off its cash target – is Adam Wilkinson, director of Edinburgh World Heritage.

He said: “He is looking a bit ropey because cracks in both the horse and Charles’ hip have let water and frost seep into the body of the statue.

“As a result he is lurching forward and needs a fair bit of careful specialist work to get him looking good again.

“Once we’ve got him open we will hopefully see more evidence to point towards this being a Grinling Gibbons piece.

“It’s not like there will be a signature or anything obvious like that, but archival research should help us be more sure who originally created it.

“We’re excited this is going ahead because he is a hugely important figure, not just to Scotland but the whole of Britain.”


Charles II was king of England, Scotland and Ireland, and his restoration to the throne in 1660 marked the end of republican rule in England.

The Edinburgh statue was erected following his death 25 years later.

Councillor Deidre Brock, who oversees the city’s culture and leisure committee, hopes the repairs will leave a lasting source of education.

She said: “This striking statue is the oldest in Edinburgh, occupying a prime position in Parliament Square at the heart of the Old Town.

“By restoring it we will be preserving a significant Edinburgh landmark for future generations.”