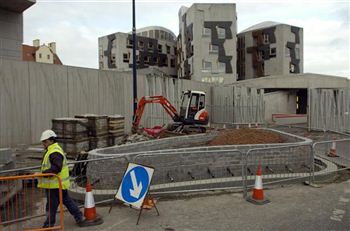 FAILING new security bollards around the Scottish Parliament have been criticised by an MSP who says they defy the idea of open parliament.

The SNP’s John Wilson says the £40,000 bollards – which can be automatically lowered into the ground to allow access – are like “a ring of steel.”

He fears the perimeter barrier – designed to prevent terror attacks – sends out the wrong message to the public.

Wilson’s comments come after reports that Holyrood chiefs were left red-faced when three mechanical bollards got stuck when a VIP tried to get in.

The blunder is said to have forced Lord David Wilson, the Lord High Commissioner of the Church of Scotland, to enter the Scottish Parliament by a side door.

“They also go against one of the concepts of the Scottish Parliament, which was for it to be people-friendly and inclusive.

“A ring of steel and concrete around the parliament is not a welcoming sight for people.”

The bollards were installed in April after MI5 warned existing security measures had to be upgraded.

They are joined outside the building by long concrete benches, a triangular roundabout and security turnstiles – all designed to protect those inside.

They said: “They regard it as a teething problem and will fix it at their own cost.”

Paul Jeffrey, managing director of Avon Barriers, admitted the bollards had been misfiring.

He said: “There was probably some dirt from the installation that got inside the tubes, which has made them a bit sticky.

“They have been taken out and cleaned up.

“This is part of the installation process.”