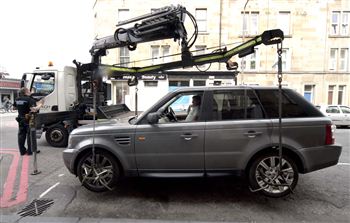 A DRIVER gave hope to motorists across the country today when he took on Edinburgh’s notorious parking wardens – and won.

Range Rover-driving Johnny Higgins spotted his car being lifted onto the back of a flatbed lorry after overstaying a parking ticket by just 40 minutes.

Threatened with a £150 fine to get his £35,000 motor back, quick-thinking Mr Higgins leapt into the driver’s seat and refused to budge, sparking an hour-long standoff.

Police were called in to diffuse the situation but the wardens eventually gave in, telling him: “Fair play to you.”

The AA said wardens had acted disproportionately and called the outcome “a small victory.”

A council source said that the motorist was a persistent offender with outstanding fines.

But Mr Higgins hit back and said: “It’s just typical of this council. 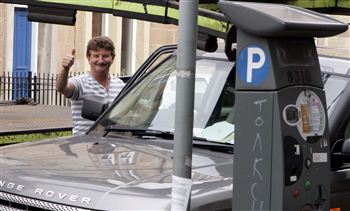 “I was coming along here and saw they were about to lift my vehicle.

“I flashed the lights on my car so they would know I was coming but they continued to attempt to lift it.

“So I jumped in. They gave no reasoning at all.

“I was 40 minutes over my ticket but I was in the space so I can’t see what I did wrong.

“The last word from the council guy was ‘fair play to you’.”

Mr Higgins’ ticket ran out at 2.36pm and he returned to his car – which was parked on Caledonia Place near Haymarket Station – around 3.20pm.

Two officers from Lothian and Borders police were called and calmed the situation before Mr Higgins was unhooked from the truck and allowed to go at around 4pm.

Before he left the parking attendant passed him a £30 fine – saving Mr Higgins a hefty £150 release fee.

Nearby Dalry Road was filled with onlookers watching as the drama unfolded.

One onlooker, Bruce Bairnsfather, said the standoff had been going on about an hour before it was resolved.

He said: “I saw the guy sitting in his car not moving.

“The council guys were trying to take his vehicle away.

“I did think it might have been better for him to just pay the £170 towing fee and not end up in court but he got away with it.

“Good luck to him, it’s not every day that happens.”

Traffic on Caledonia Place came to a standstill as Mr Higgins refused to move but everyone seemed happy to see him win.

A council spokesperson said: “As soon as the wheels leave the ground it is impounded but we can’t tow a car with a person inside.

“Our attendants called the police and had no option but to follow their instructions.”

Paul Watters, head of roads policy at the AA, said that Johnny’s quick thinking was a victory against a disproportionate response.

He said: “If this was simply case of overstaying in a designated parking bay then towing the vehicle does seem a fairly tough response and I would have thought a ticket would have been sufficient in the first place.

“It does seem strange that they back down and I’m glad that they seem to have seen sense. It sounds like a good outcome.

“I would not encourage people to take risks but he got a small victory against a disproportionate response for a relatively minor parking offence.”