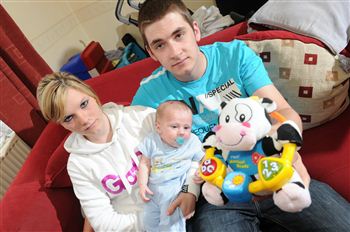 A SHOCKED mum blasted a musical toy cow which seems to sing the word ‘sex’ as part of its jingle.

It came as an udder shock to Jodie Cairns, 20, when she unwrapped Moosical Beads and it appeared to sing “learning colours and sex, yippee”.

She and her partner Zac Walker, 20, “couldn’t believe their ears” and have now confiscated the interactive toy from their four-month-old baby Ethan.

Printed in the lyrics as the word “shapes”, the pair are certain the cow is singing a naughty phrase to their son.

Jodie from Wester Hailes said: “Ethan’s grandma bought the toy from Tesco in March as a present, but we didn’t get it out of the box because he was too little.

“Then we started playing with it and we noticed that it appeared to be saying ‘sex’.

“We listened to it again and again and thought ‘Oh my God’. It’s shocking – what if my boy had been a lot older?

“What would they say about us as parents?”

And Ethan’s grandfather Brian Walker, 55, added: “I recorded it on my computer so I could get a clearer version of the song, and I played it over and over.

“My theory is that some technician has been having a laugh, but I suppose somebody could have gotten the word wrong by accident as it was made in China.

“We know he’s just young and doesn’t understand now, but what if a toddler was listening to it?”

Moosical Beads isn’t the first toy to be accused of swearing, with complaints last month that cuddly dog My Pal Scout was singing “f***” instead of “bark”.

And when grandmother Beverley Walker bought Ethan Moosical Beads she also purchased My Pal Scout, but won’t be giving it to him.

She said: “I bought that too but we haven’t opened it yet, and we won’t be doing so now.

“You have to wonder if the people who make these toys get a bit bored and decide to play a joke.

“When I bought it, it was a bargain because it was half-price at £6.47, but we’d like our money back and to make parents aware that the cow is a little bit rude.