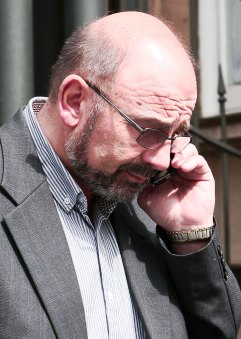 A BUSINESSMAN was gunned down on the steps of a casino over the £1m plus gambling debts of his high-flying financier son, a court has heard.

Four men have been jailed over the attempted slaying but the motive behind the hit has remained a mystery.

But today (Tuesday) a court was told the attack came in retribution for the unpaid debts of Mr Demarco’s son, Antony, to loan sharks covering his gambling losses.

The revelations about the motive behind the notorious attack came as Antony admitted a £1m fraud against two companies.

Antony Demarco, 37, had been a freelance finance broker with a massive gambling problem.

After a string of losses he turned to loan sharks to pay-off the debts but failed to keep-up with their demands for payments.

But after his dad – a sandwich bar owner – was targeted in a murder plot, he ripped-off two companies who trusted his reputation to the tune of £1m in a bid to pay them off.

At Edinburgh Sheriff Court Antony pleaded guilty to a fraud worth £1m, with his father in court to support him.

Antony’s solicitor Joe Mooney said that his client had a long-standing problem with gambling and was forced to borrow money to cover losses in 2008 but fell behind when the loan sharks changed the terms.

Mr Mooney said: “In a sense he had always been involved in gambling but he had never had to resort to anything like this to fund that.

“He gambled with the money proceeds of his business which had gone well.

“The terms under which he borrowed the money were not the terms which the money lenders were looking for it to be paid back and his failure to keep up with this led to the shooting of his father.”

Mr Mooney said the shooting of Antony’s father forced him into the scam to pay them off.

He said: “It was at that point which Mr Demarco embarked on the course of action that we have heard about.

“He almost knew it was inevitable that he would be caught but it was the position that if his father was not shot he would not have become involved in these activities to pay back the money lenders.”

Fiscal depute Gerard Drugan told the court: “The panel had been spending large sums of money with betting companies and examination showed that there were betting losses of over £1m in the year prior to the police investigation.”

Mr Drugan told how just a month after the shooting, Antony – a registered asset finance broker – set up a scheme to swindle cash from Lombard Finance and Hitachi Capital Finance.

From July 25, 2008 Antony abused his contacts in the financial industry to make a total of 23 fake loans on non-existent assets.

The scam continued for more than a year, during which time he took the financial firms for a total of £1m.

The dad-of-two was caught when RBS fraud investigators called in police and Antony admitted everything when confronted.

Bankrupted by the affair, Antony was forced to hand in his passport and report to a police station every week to stop him fleeing the country in the months before his court date.

Mr Mooney added that Antony, who has over 15 years experience in the financial industry, was now attending Gamblers Anonymous to help with his addiction.