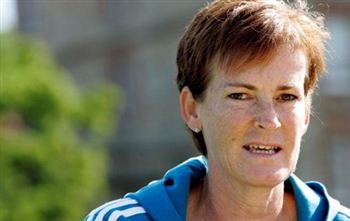 JUDY Murray says Scotland must adopt America’s “tennis culture” if anyone is to follow in her son Andy’s footsteps.

She helped give out 7,500 mini tennis kits to school children in Edinburgh today.

But the 50 year-old coach fears efforts to teach children tennis skills could be a waste of time because the country is lacking in facilities.

Speaking ahead of Monday’s Wimbledon curtain-raiser, Judy told how her sporting sons Andy and Jamie caught the tennis bug as youngsters on a trip to America.

She said: “The Tennis Foundation has given mini tennis kits to 7500 schools across the UK.

“But we need proper tennis facilities nearby in order to convert the skills to the full game.

“In the USA, the Williams sisters came up through the park tennis circuit.

“The first time I took Andy and Jamie to the Rose Bowl in Miami, there were loads of park competitions within a ten mile radius. 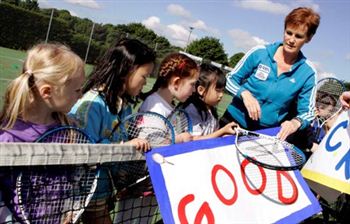 “Just little parks with four or six courts, but always someone in the pavilion to hand out balls and rackets.

“We need to develop that culture to make it easy to play.”

But she admitted winning the SW7 tournament will be “difficult.”

She said:  “Andy is in London for a week to get himself ready and in the best possible shape for the start of the tournament on Monday.

“It’s difficult to win a Grand Slam, you need to win seven matches in 13 days.

His mum was visiting Meadows Tennis club in Edinburgh to help launch a sports fundraising campaign with P1 pupils from Sciennes primary school.

The pupils were so excited about getting a famous PE teacher for the day that they made a sign reading ‘Good Luck Andy’.

The youngsters have been getting tennis lessons and are holding a tennis ‘keepy-uppy’ marathon to raise money for sports in schools.

Teacher Emma Kelly said that the tennis lessons were a hit with the kids.

She said:  “They have had four sessions in total and they love it.

“They all said that it was their favourite part of primary one.”

He said: “The coaches make it attractive and easy to play.

“It’s great to have Judy along to support the school.”

Tennis fans get chance to own rackets, towels and shoes used by Murray brothers as part of charity auction