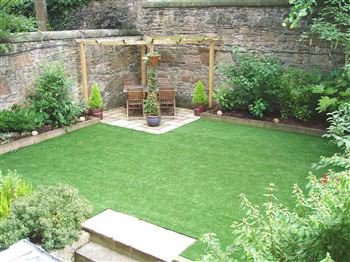 THE ultimate house for the lazy gardener has gone on the market after its owners spent £9,000 on an ASTROTURF lawn.

Without a lawnmower in sight, the three-bedroomed ground floor flat in Edinburgh’s West End barely needs any upkeep.

And with weeding out the window, the £380,000 pad is being marketed as a perfect place for its new owners to party all year round.

The flat’s current owners, David and Karen Lang, spent thousands of pounds installing the artificial grass, which they say meant they had less time weeding and more time revelling.

David, 39, said: “When we bought the house the garden was just paving slabs.

“It was a beautiful home when we moved in so we wanted to bring it up to the same level as the rest of the place.

“The garden really let it down.”

Even though the couple did it all themselves, they reckon the huge fake turf garden looks just like the real thing.

Even their letting agents were convinced the grass was genuine and nearly marketed it as such.

David added: “Our garden really stands out and is different from the rest of the gardens in the street – it looks like it’s been done by a professional and it really hasn’t aged in the time that we had it laid.

“We did it so it looks great all the time and the only thing we’ve ever had to do during the autumn and winter months is clear up some leaves. 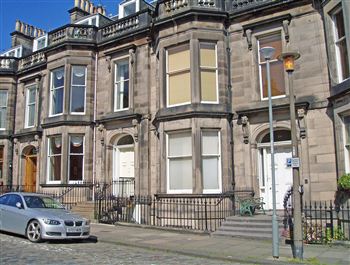 “It’s really about being able to enjoy it and not having to worry about it.

“We wanted to make it ultra low maintenance and spent between eight and nine thousand pounds on its renovation.

“It has made such an enormous difference to the whole feel and enjoyment of the house.”

Sadly for David and his wife Karen, 31, their newborn son Daniel will never get to kick a ball on the dream back garden football pitch at their Coates Gardens home.

Instead they are moving closer to their work at a medical tool company in Stirling.

The boss of the firm selling the flat said she was “fooled” by the astroturf garden and hopes it can convince gardening fans to hang up their tools.

Avril Hislop, the property sales manager at Warners, said: “I was staggered to discover that the lawn was artificial.

“I absolutely loved the particularly secluded back garden which totally had me fooled with its beautiful lush green lawn.

“This house is perfect for families who don’t want to spend their weekends weeding or maintaining the garden and it doesn’t even deteriorate in condition over the winter months.

“I wouldn’t be surprised if even the greenest fingered person didn’t find this garden attractive as it really ticks every box for appearance and quality.”

Pensioners enjoy a summer of horticulture