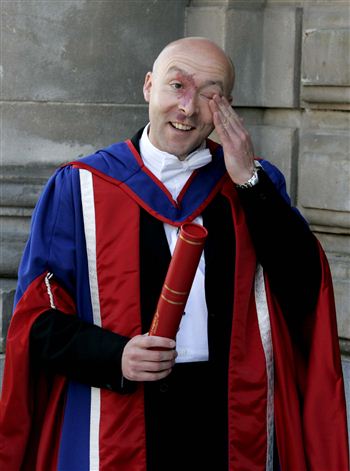 SCOTTISH crime author Christopher Brookmyre went back to school today to pick up an honorary degree.

The novelist said he felt like he had finally been acknowledged as more than a crime writer after Edinburgh Napier University gave him an Honorary Doctorate of Letters.

As he joined the 1,700 other Napier students graduating at the Usher Hall ceremony, he said he was humbled by the acknowledgement.

He said: “It has been enormously surprising, it was totally unexpected.

“I don’t quite know what to do with myself – I’m not massively familiar with this academia thing.”

Brookmyre is no stranger to awards, having collected dozens during his career writing fiction, including his first crime novel Quite Ugly One Morning.

But he said in this instance it was wonderful to have his whole line of work honoured, as he does not only think of himself as a crime writer.

He said: “I’ve only ever had awards for my crime books before, but I’d like to think that people will acknowledge my other more comic books as well. 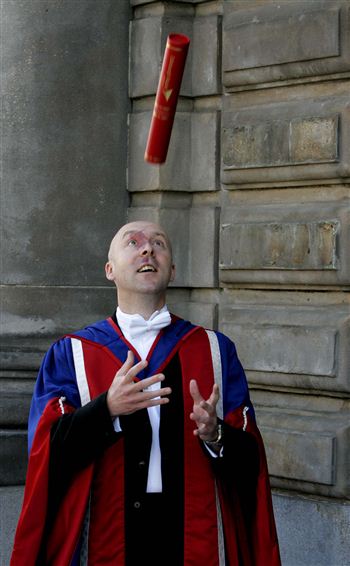 “This recognition shows that everything has been taken into consideration.”

The Glasgow-born writer is currently working on his next book, which he said will be released this time next year and will be titled Where the Bodies are Buried.

He said he would love to see his books turned into films in the future, but the setting of many of them would make it rather difficult.

He said: “All of my stories seem to be set in some deep underground lair, so if anyone could actually get one off the ground and made into a film that would be fantastic.

“I often think a novelist is the last person who should be involved in the film adaptation of their own book; you have to let other people hoist their own interpretations into it.”