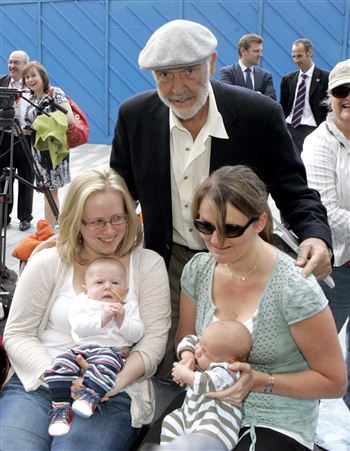 FROM EDINBURGH WITH LOVE: Sir Sean Connery took time out of his whirlwind schedule to pose for photos with babies Oliver Curnow and Robert Hutchinson. They were born in the same Fountainbridge neighbourhood as the 007 hero, who was happy to meet their mums Miriam Leighton and Fiona Hutchinson.

A BAFFLED Sir Sean Connery said he felt “lost” while given a tour around the Edinburgh streets where he was born and grew up today.

The Bond legend showed no hard feelings at the fact that his former stomping ground of Fountainbridge had been redeveloped.

Instead the 79 year-old agreed to unveil a plaque at a new housing development to commemorate the area he grew up in and worked as a Co-operative milkman. 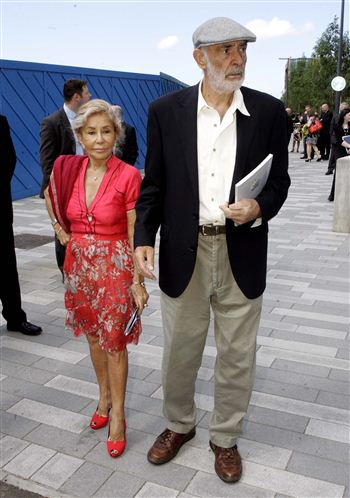 And he met some old friends along the way, including artist Richard Demarco who used to get Sir Sean to model for him during the 1940s when they were teens.

Fresh from his red carpet appearance at the Edinburgh International Film Festival, Sir Sean admitted he hardly recognised the neighbourhood.

“I look forward to the whole thing being finished.

“The new cinema is staggeringly good, it used to be the old empire theatre.”

The Hollywood star seemed fascinated to return to site of his 1930 birthplace and revealed a plaque erected as close as possible to the now-demolished 176 Fountainbridge tenement he grew up in.

He was welcomed by people who knew him by his birth name Thomas and those who remembered his cleaner mum Effie and factory worker father Joseph.

Their stories took Sir Sean on a trip down memory lane from his humble first jobs as a milkman and Portobello lifeguard.

There to greet Sir Sean was his old friend Richard Demarco , 80, who co-founded the nearby Travese Theatre.

Sir Sean always had an “aura about him” even when he was young, according to Richard.

He said: “We’ve known each other since the 40’s and I remember him as Tommy, he modelled for me when I was at art school.

“He had an aura about him even then. 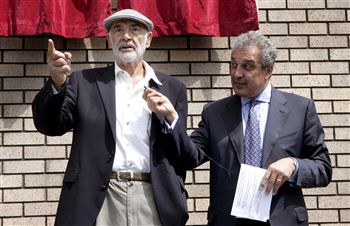 “When his acting career got going, he would always visit me with his family when he came to the Edinburgh Festival.

“He asked me to be the director of the Scottish International Education Trust, which he started with money from his first Bond picture.

“The trust enabled Scottish artists like Will McLean to remain in Scotland and work.”

As the pair reminisced of the streets replaced by the new Springside development, Richard presented Sir Sean with a book about the Demarco art collection, featuring photos of the Connery family.

And after the ceremony, Sir Sean posed for photos with some of the area’s newest residents – babies Oliver Curnow and Robert Hutchinson.

They came along with mums Miriam Leighton and Fiona Hutchinson who now live in the new houses at Springside.

Proud dad Jez Curnow said: “Oliver’s grandparents will be chuffed with these photos.”

Also on hand to greet sir Sean was Jimmy Smith, 75, who knew the Connery family when they lived in Fountainbridge.

He used to visit Sir Sean’s mother and remembers when Sean did bodybuilding.

Jimmy said: “His mum and dad were very nice people.

“Last time I saw Sean was at the Usher Hall about 14 years ago.

“I knew him as Tam back in those days.

“It was nice to see him and shake his hand.”