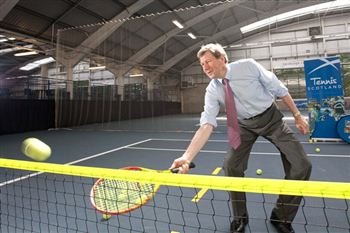 The minister was grateful to get some tips on his backhand and freely admitted: “My tennis isn’t very good.”

The huge fund is made up of cash seized by police from criminals and will be distributed over the next two years to support athletics, badminton, hockey, squash and tennis programmes for young people.

Speaking at the Craiglockhart Tennis Centre in Edinburgh, Mr MacAskill said: “This is part of the Cashback to Communities initiative which takes the profits from crime and puts the money back into the communities affected.

“We’ve funded football, rugby and basketball but we also want to make sure we fund other sports.”

“We want kids to be capable of being all they can be. “

“Kids who might not otherwise have the opportunity will get the chance to play squash or badminton or hockey.”

“We want kids for all parts of Scotland to be able to participate in things to keep them out of mischief and what better way to fund than from those who have been causing misery.”

The Scottish Government has pledged to invest £17m from the Cashback to Communities fund to help young people.

Lisa, 20, is waiting to hear whether she will feature in the Scottish squad for the Commonwealth Games in Delhi in October.

She said: “Sports Scotland won’t announce the team until August, but in the mean time I just need to train as if I have been selected.

“It will set me up well for the start of the season anyway.”