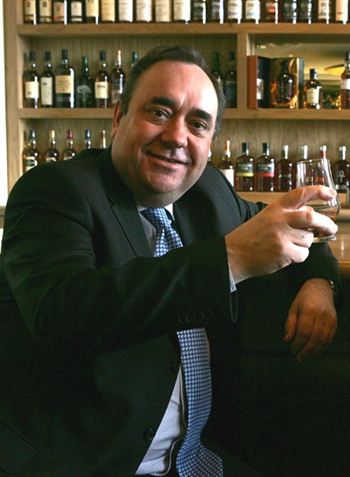 ANDY Murray will get a champagne reception at Edinburgh Castle if he wins Wimbledon.

Scotland’s tennis ace was given the ultimate incentive to become king of the castle today by First Minister Alex Salmond.

The 23 year-old has had a difficult couple of weeks in the run up to next week’s tournament, beaten at the French Open and at Queen’s.

Even his own mum Judy admitted it would be “difficult” to win the tournament earlier this week.

But the tennis star has the full backing and good wishes of top Scottish politicians, who are preparing to celebrate his win.

Alex Salmond said he would honour the player with a huge party if he clinches the trophy at SW7.

The First Minister said yesterday: “I think he’s got a very good chance this year.

“He was on great form for a while there but nobody can be expected to hang onto that forever.

“Andy is always under a lot of scrutiny at Wimbeldon.

“He’s got certain expectations to live up to and the added pressure might give him an advantage because he will want to prove himself.

“I’ll be watching, and I wish him all the best.

“Here’s an incentive – if Andy Murray wins Wimbeldon then we will hold a reception at Edinburgh castle, how does that sound.”

And justice secretary Kenny MacAskill also wished the Dunblane player well for his 2010 Wimbledon campaign, saying the whole country would be behind him.

He even hinted that Murray should get a gong from the Queen if he emerges from the two-week tournament as champion.

He said: “All of Scotland will be behind Andy Murray and good luck to him.

“He will be recognised and celebrated in Scotland whether he wins or not.

“If he does win I hope that recognition will come from all paths, whether it’s officially through the crown or just the fact that all of Scotland is behind him.”

But Murray’s own mum isn’t as certain that he will smash his way to victory.

Speaking at a sports fundraising campaign in Edinburgh earlier this week, Judy Murray said her son would be as prepared as he can be for the start of the tournament.

She said: “It’s difficult to win a Grand Slam; you need to win seven matches in 13 days.

“Andy has been in London for a week to get himself ready and in the best possible shape for the start of the tournament on Monday.

Murray has been seeded number four at Wimbledon, reflecting his current world ranking.

In order to win his first Grand Slam is it likely that he will have to beat the number one seed Roger Federer in the semi-finals.