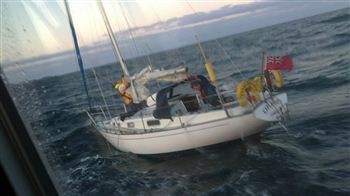 THE FIRST day on a new job was far from plain sailing for the coxswain of Dunbar’s RNLI.

Jamie Lamb, 25, was forced to lead his team through gale force winds and high seas to rescue a couple from their yacht off the East Lothian coast on Saturday night.

The dramatic rescue was launched after the lifeboat crew received reports of an Edinburgh couple in their 50s who were suffering from sea sickness in huge waves.

Their yacht, the Explorer, was stranded eight miles offshore.

So Jamie and his crew launched in bad weather to rescue them.

Jamie, the station’s deputy 2nd coxswain, said: “When we arrived at the lifeboat berth at Torness on Saturday night I initially thought there was a chance we would not be able to leave the mooring the seas were so big.

“The yacht had given its position as a mile and a half north of Dunbar but once we got out of Torness we discovered she was actually over eight miles north.

“It took the best part of an hour to reach her punching our way through a fairly big sea.

“I was talking to the yacht crew on the radio most of the way there reassuring them that we were on our way and it was clear they were in a lot of trouble.”

And once they reached the stricken vessel, they had a job on their hands trying to get onboard.

The first attempt to get alongside the yacht failed, leaving Jamie with no choice but to get the boats into calmer water.

Jamie said: “It was just too tricky.

“The waves were massive and I ended up hitting the yacht – fortunately no damage was caused.

“We could see the man and woman on board were in pretty poor shape and had to be got off quickly and so I told them to motor a little further north to get into the calmer water in the lee of the Isle of May.

“Once there we were able to get alongside for a couple of moments – just enough time to get them off and two of our crew on board the yacht.”

The lifeboat rushed the couple back to shore at Anstruther where they were met by paramedics and treated in the lifeboat shed.

Their yacht was sailed back to safety at Pittenweem by lifeboat crewmen Stuart Pirrie and Jamie Forrester.

The young coxswain was praised for his first shift on the job by Gary Fairburn, who received a [email protected] award earlier this month for his part in the rescue of a stranded Swedish yacht last year.

He said: “This was truly a baptism of fire for Jamie – he demonstrated real cool and a high level of seamanship carrying out what would be a difficult rescue for even the most experienced of coxswain’s.”