MILITARY chiefs were joined by a World War II veteran to mark the start of Armed Forces Week in Scotland’s capital. 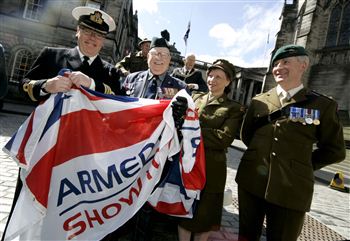 The Armed Forces Day flag was parachuted into Holyrood Park by four members of the Royal Regiment of Scotland’s parachute display team the Golden Lions.

It was then driven up the Royal Mile in a 1953 Austin Champ army truck where it was passed on to three members of the 3 Rifles.

The 3 Rifles – who have recently returned from a gruelling six month deployment to Afghanistan – marched to the City Chambers before presenting the flag to the Lord Provost of Edinburgh, George Grubb.

WWII veteran Richard Webster was there to witness the flag being hoisted up above the council buildings to mark the start of a week of celebrations across the country honouring the armed forces.


The 90-year-old served in The Cameronians (Scottish Rifles) for 31 years and saw action in Malaya, Cyprus and Suez.

With 11 medals, two for bravery, the former regimental sergeant major was proud to be a part of the ceremony.

He said: “Armed Forces Day gives the general public an idea what it’s all about.

“There are a lot of soldiers out in action and they people need to know what it is all about.

“What a lot of people don’t realise they are all volunteers.

“In my day we were picked, there was conscription, but now they choose to go out there.

“You get all these youngsters running about who don’t care about the military but if it wasn’t for guys like us they wouldn’t be here.”

Mr Webster, from Edinburgh, wouldn’t say what his bravery awards were for, just saying that it was “something that happened” in the course of his job.

He said: “It’s for putting your head in the wrong place at the wrong time.

“It’s just something that happens.

“You don’t set out to get something, you just so your job and these things happen.”

The flag was driven up the Royal Mile in a 1953 Austin Champ by military vehicle enthusiasts Garry and Fiona Morton.

Members of the Scottish Military Vehicle Group were called in to provide a glimpse of what the army was like post-war.

Clad in WWII uniform, the paid said they were honoured to be a part of Armed Forces Day.

Garry, 62, said: “It’s a great honour for civilians to be able to carry the flag.”

Lord Provost George Grubb said: “Edinburgh has a long and proud tradition of supporting the Armed Forces and raising this flag at the City Chambers will serve as a poignant reminder of all those who have fought on our behalf.

The capital will be hosting thousands of military personal on Saturday as they celebrate Armed Forces Day in Princes Street Gardens.

The day was created to give the public a chance to learn more about the military and support all members of the Armed Forces, including veterans and those who are currently serving in battle.

Yesterday’s events coincided with the announcement of the 300th death of a serviceman in Afghanistan.

The latest casualty, from 40 Commando, was injured in a blast in the Sangin area of Helmand Province on June 12.

He died at the Queen Elizabeth Hospital in Birmingham on Sunday morning with his family at his side.

The foods that the UK missed most during lockdown