A ROSE in a coffee cup has scooped a budding artist the young photographer of the year award.

Julia Dransfield, 17, said she was delighted to land this year’s top prize at the Rotary Club’s young photographer competition. 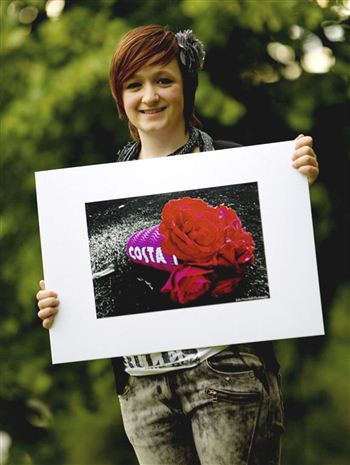 Judges said her entry, a picture of a rose in a discarded Costa coffee cup captioned ‘Just add water to reuse and revive’, met the ‘Are we Waste Aware’ brief both technically and artistically.

Julia, from Portobello, Edinburgh, was presented with the award at a ceremony in Stirling last week after beating off 400 other hopefuls from across Scotland.

The delighted teenager said: “I’ve been keen on photography for a good three years now but this is the first competition I have entered.

“I never expected to win – it was enough of a shock to win my own 16 to 18 category, but when I heard my name being announced for the overall prize I felt like crying.

“It was amazing to see people as young as five and six putting in some amazing entries.”

Julia said she is excited about her prize, which is an opportunity to take part in a professional photo-shoot with a picture agency.

The Portobello High School student said: “I’ve never had any professional experience nor had anyone teach me anything.

“It will be a great experience I’m sure and really I can’t wait.”

Julia became interested in photography after talking to a friend who had taken it up as a hobby – and soon after the same friend helped pick out her first camera.

She said: “The inspiration for my entry came one day when I saw a rose that had been picked and just thrown away on the side of the road.

“I hate to see that because roses are my favourite flower, so I guess the message here is about reusing things and giving them a new lease of life.”

As Julia looks to the future, she said a college photography course could be on the horizon but at the moment she has a few other things planned.

She said: “I’m going to be doing a club night every week in Edinburgh and they have asked me to be their official photographer which I am really excited about.”