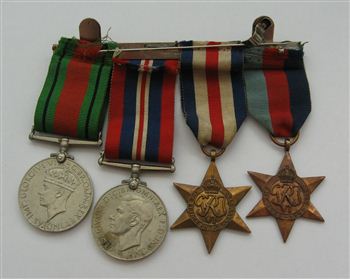 POLICE are searching for the owners of a stash of war medals found in a house full of suspected stolen goods.

The four WWII medals were found after the house of two men arrested for alleged house breaking was searched.

The two men were charged in connection with alleged housebreaking and thefts from the Muirhouse area of Edinburgh in April, and it is likely that the medals’ owner comes from that area.

Two of the medals are silver circles, and the other two are bronze stars.

The Defence Medal was awarded to non operational service, including members of the armed forces who served in headquarters, airfields and members of the Home Guard between 1939 and 1945.

The France and Germany Star was given for service in France, Belgium, Luxemburg, Holland and Germany between the D-Day landings and the German Surrender.

The other two medals are the 1939-45 Star, awarded for serving overseas in that time, and the War Medal, given out for any service during WWII.

Both medals could be awarded to any member of the navy, army or airforce.

It is believed that the two silver medals have swapped their ribbons at the some point.

The George VI awards were found in a house in Muirhouse Green when it was searched by police.

They are hopeful that the owner of the medals will come forward and claim them.

A police spokesman said: “These medals are undoubtedly of sentimental value to someone, however, we have yet to identify whom they belong to.

“For that reason, we would be keen to speak to anyone who may be a victim of a housebreaking and had their war medals were stolen.

“Similarly, anyone with information that can assist us in returning the medals to their owner should also get in touch.”