A BRAVE shop worker stood up to a knife-wielding thug by offering him cigarettes.

Sadi Anwar, 27, was just a month into her job at an Edinburgh newsagent when the knife raider left her fearing for her life.

The would-be thief ran into the shop holding a 10-inch blade and demanded all the money from the till.

But quick-thinking Sadi told him there were no takings and instead handed him a pack of 20 Lambert and Butler.

To her amazement, the hooded invader accepted the offer and fled just 60 seconds after he arrived.

Now recovering from her ordeal, Sadi said she is determined not to let the attack put her off working at the News Plus shop in Lasswade, near the city’s Royal Infirmary.

She said: “It is a nice area so I was totally shocked when he came in with his hood up and a knife.

“I could see the knife but kept my eyes on his face so he didn’t think I was scared. 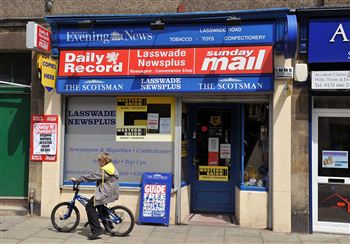 “He said, give me all the money or I will kill you.

“I just said we had none and turned to the cigarettes.

“He seemed quite happy when I gave him the cigarettes and just ran out.

“It was terrifying but I was amazed and relieved when he left.”

The chilling threats were captured on the store’s CCTV system at 2.30pm on Wednesday.

Police are also scouring the tapes of surrounding businesses to track down the suspect, who is described as white, 25 to 35-years-old, around 6ft tall, clean shaven and with short dark hair.

He was wearing dark trousers and a black hooded top with grey sleeves.

A Lothian and Borders Police spokesman said: “While the victim wasn’t injured, she was understandably distressed as a result of her ordeal, and we are keen for any information that can help us identify the suspect.

“Anyone who was in the area at around the time of the incident, who noticed the suspect there, should contact police immediately.

“Similarly, anyone who recognises the description of the suspect, or who has any other information that can assist our inquiries, should also get in touch.”