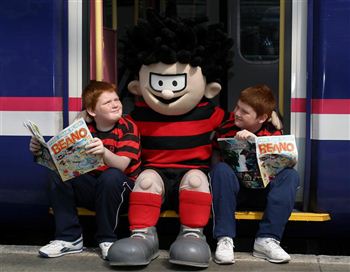 SINGER Cheryl Cole is set to star in Scots comic The Beano as Minnie the Minx’s new sidekick.

The Girls Aloud star will team up with the Beano bad girl in a series of cartoon strips published from next month.

Dundee-based publishers DC Thomson spotted her sporting a red and black striped outfit in her video for “Fight For This Love.”

A Beano spokesman said: “Minnie the Minx will be meeting Cheryl and Wayne in a run of stories which will coincide with the school summer holidays.

“They are both hugely popular with readers and I’m sure they’ll be thrilled at the prospect of them coming face to face with a national institution, in the shape of Minnie.”

Cole, 26, will join Minnie in a duet – while Rooney, 24, will risk injury by taking to the field alongside the hard-tackling schoolgirl.

Minnie the Mix has been terrorising teachers in her comic strip since 1953.

Plans to make ultimate McQueen handbag – using his own skin