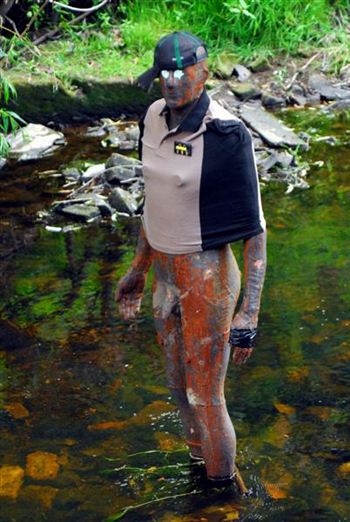 VANDALS have given Antony Gormley’s latest creation a Mc-makeover – dressing his statue up as a burger flipper.

The sculpture in Edinburgh’s Water of Leith has been decked out with a McDonald’s uniform, complete with a baseball cap and name badge.

The artwork’s new fast food look comes just a week after it and five others were officially unveiled.

It’s not the first of Angel of the North creator and Turner Prize winning artist Gormley’s pieces to be targeted.

A different figure from his “6 Times” project was dressed in a luminous pink bikini earlier this month in Stockbridge.

The statues are among six hidden along a three mile stretch of the capital’s Water of Leith.

Passer-by Lizby Andrews, 54, said: “This one had a full-sized bath hanging off his head last night and this afternoon he is a McDonalds employee.

“I wonder what he will be tomorrow.

“It must have been somebody’s last shift serving fast food and they didn’t bother taking the uniform back.

“It’s a shame they seem to have spray-painted the eyes out though.”

Gormley could not be reached for comment on McDonalds makeover of his water statue near Ferry Road. 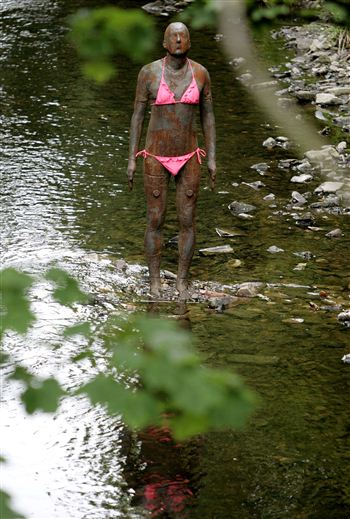 But at the project’s launch last week he said locals were keen on the metal men.

He said: “From the reactions of the last week, when these pieces have been going in, it’s been really encouraging.

“People have taken them on board.

“The figures may be silent, they may be rusty, but in terms of how people have looked on these new neighbours it’s been very positive.”

“Edinburgh has no lack of culture.