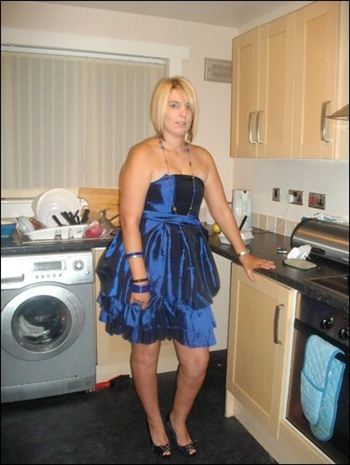 EMOTIONAL tributes have been paid to a mother-of-three killed in a horrific blaze which ripped through her family home – just a month after she moved in.

Tragic Angela Campbell, 23, died in the ferocious fire at her three bedroom home in Livingston during the early hours of Saturday morning.

Her children Jordan, five, Ryan, two, and Mia, one, were only spared after staying with relatives overnight so Angela – who had been due to start a college course after the summer – could enjoy a night out with friends.

Yesterday the charred remains of furniture, flanked by dozens of floral tributes, showed just how ferocious the blaze had been.

Shell-shocked neighbours said they were left helpless in their attempts to try and rescue the trapped mother because of the heat and flames. 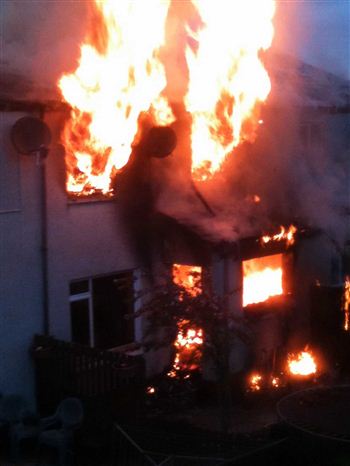 The 41-year-old said: “We were at our upstairs window and I just could not believe the force of the flames, they were so powerful.

“By the time we saw what was going on it had just taken over, there was nothing any of us could do.

“We eventually had to shut the window and stay inside. Then the firemen brought out their hoses because the water was spraying everywhere.

“You can see right in the one window which has been left unboarded, and you can see there is absolutely nothing left of the house at all.

Hi wife Cathy, 39, a worker at the local Ethicon factory, said: “You read about these things all the time and think nothing of it, but when it’s right outside your house you can’t help but feel affected.

“Even though I didn’t know her at all I still can’t help but feel upset.

“I heard something outside and I thought maybe someone was having an argument, but when I looked out I saw the kitchen and upstairs windows with flames coming out of them.

“The fire had spread right the way to the other side of the house and completely taken over.

“I woke up my partner and we were about to phone for help, but just then the fire brigade turned up.

“We never really saw anything of her, but the kids used to be outside all the time in the back garden and on the trampoline.”

“It is such a shame those little children are being left without their mother, just thank God they weren’t in the house at the time.”

Keith Porteous, 33, lives in the house next door.

He said: “I hardly knew her at all, she had only just moved in about a month ago.

Yesterday neither of Angela’s children’s fathers, Ryan and Mia’s dad Thomas Redmond or Jordan’s dad Scott Macmillan, could be contacted about the tragedy.

The children were being cared for by her grieving parents.

Mum Helen, 47, and landscape gardener step-dad Paul Seagrave, 48, both live in the West Lothian town nearby.

At their home a man – identified as an uncle – said: “We are not ready to speak about our loss yet. It is still too raw and we are still dealing with it on our own and as a family.”

Angela’s parents were too upset to speak, but posted a message on their daughter’s Facebook page.

It read: “Miss you so much, you may be gone and times are extremely hard but you will never been forgotten. Love you Ang.”

Sister Amanda Campbell, 19, and half brother William Morris, 27, were also trying to come to terms with the heartbreaking news.

In an emotional tribute on Angela’s Bebo page, Amanda said “Hey sis, hope you are doing okay, I am missing you so much, just can’t believe you are gone.

A blanket of flowers was also laid outside the burned out home in tribute to the former James Young High pupil described in a message as “one in a million”.

One card read: “To Angela, you are sleeping with the angels, you will be sadly missed.”

And another grief-stricken message read: “Once an angel always an angel, you are up in heaven looking down on everyone.

“Angels are only for special people and you were one of them.”

Angela – had been due to start a course at Stevenson College later this year – and had only recently moved into the street where she lived alone with her three children according to neighbours.

She had been on a night out with friends at local nightclub Club Earth, before returning home alone.

Firefighters said they raced to the scene of the blaze after frantic calls from members of the public at 4.41am.

They battled the raging flames for hours but were unable to save the tragic young woman who died at the scene.

Last night the house stood with no roof and boarded up windows which have been blackened around the edges from the flames.

Scorched furniture lay in a pile of rubble outside the back door.

The cause of the fire was still being investigated however police have indicated that there are no suspicious circumstances.

Lothian and Borders Fire and Rescue service said their thoughts were with Angela’s family and added that investigations into the blaze were on-going.

Stuart Stevens, Group Manager at West Lothian, said: “Although fire crews were at the scene very quickly the fire was well establish and very fierce on our arrival. Our breathing apparatus teams were able to enter the house but sadly they found a body, believed to be that of the female occupier within the property.

“Every fire death is a tragedy and our sympathies go out to the family. We will now carry out visits in the immediate vicinity to remind people about the dangers of house fires and give reassurance and practical advice on how residents can make their homes safer.

“Fire investigation officers have been working with the Police to establish the cause of the fire and those investigations are on-going.”

Catching up with old friends…