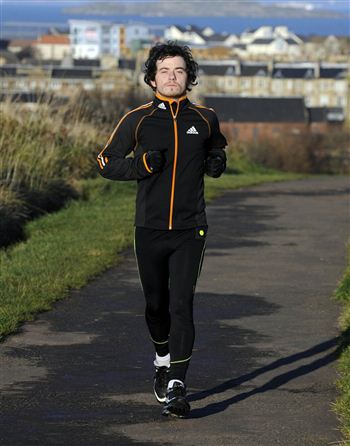 A DEDICATED Scot who ran 50 marathons in 56 days to raise funds for a cause close to his heart has smashed his goal of raising £25,000.

Mark Cooper, 27, decided to embark upon the 1,300 mile dash across Europe to give back to Edinburgh’s Headway Group, a charity he says supported his family through the loss of his mum Sheila, who died tragically in 1997 from a brain hemorrhage.

The marathon man, from Edinburgh, started running on May 1 in Amsterdam, taking the route through Holland, Belgium, France, before eventually arriving in at his finishing line in Barcelona.

And – however grueling the task was – Mark said there was never a moment when he thought he might have to pull out early.

He said: “There is no way I would have promised something I didn’t think I could deliver.

“The only thing that would have stopped me would have been a broken bone.

“Once you get started, you realise you don’t need to stop, something comes over you and you reach a place where it doesn’t hurt anymore – it’s a mental state.”

Reaching his goal was not always plain-sailing however, as after his fifth marathon Mark was left with severe pain in his left leg.

He said: “That was probably the worst day I can remember, but even then there was no stopping me because if I say I’m doing something I have to complete it.

“I was treated by a physiotherapist and after he had worked his magic it just got better and better until one day soon after the pain was gone.”

Eight weeks after setting off on the remarkable endurance journey, Mark said it is surreal to be home and settling back into normal life.

He is due to start back at the law firm where he works, but would not rule out an inkling he has for a future career in fitness training.

He said: “I think after you’ve done something like this you can never really go back to being who you were before.

“I love my job and my colleagues but it’s something I’d like to look into maybe as a side-line project.

“I want to show people that anybody can do what I’ve done if they really put their mind to it – I had never run a marathon before this, and up until 2007 I drank and smoked 20 cigarettes a day.”