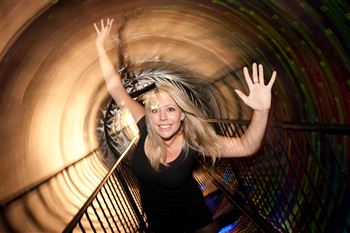 Adding to the success of its three floor World of Illusions hub, and a viewing tour allowing visitors to ‘lift up’ members of the public on the street, Camera Obscura has opened two more floors of family fun.

Tony Millar has managed the centre for 15 years, and said he and the rest of the staff have been very excited about how the £1.2m refurbishment has been coming together.

He said: “We have been waiting with anticipation of how it will turn out, as the work has been going on for about a year now and we’ve never undergone such a large scale improvement.

“We’re all really happy with the results and can’t wait to see how the public react to it.

“I think the new Ames room is going to be a favourite – when two people stand in it on either side it tricks the eye into believing one person is tiny and the other is enormous.”

However, Mr Millar said he is slightly anxious about how people will cope in the vortex tunnel, a cylindrical room which appears to spin around while visitors walk across what feels like a moving bridge.

He said: “I’m really worried a lot of people might feel quite unwell in it – I don’t want to have to be cleaning it too often if people get ill in there.”

The concept was famously used in recent years to film the Lord of the Rings trilogy of films. 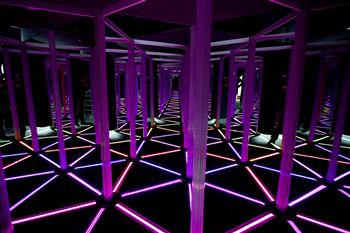 Camera Obscura is celebrating its 175th anniversary this year, and pulls in up to 1,000 visitors a day during the summer.

It was founded in 1835 on Calton Hill, before moving to its current spot on the Royal Mile in 1853, situated across two tenement houses knocked together.

Mr Millar said: “The amount of people we get in each year has been steadily increasing, and last year we had more than 140,000.

“That’s why we decided to expand and add more illusions, as there are often big queues during the summer months.

“The extension is going to more than double the floor space of the existing attractions, meaning visitors will be less crammed when trying to enjoy their experience.”

A common perception of the World of Illusions is that it is just for kids, but Mr Millar said it is not the case.

He said: “We tend to see a lot of grandparents bringing children in for days out, and they get just as much out of it as the kids, everyone right across the board has a great time here.

“A lot of research has gone into creating the right kinds of attractions for the space we had available.

“My colleague Andrew Johnson has been to every science centre in Europe, and spent loads of time planning what would work here.”