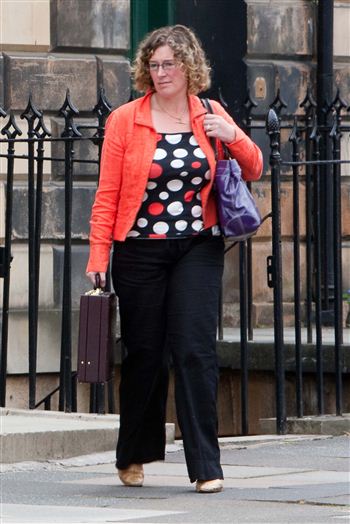 A HEAD TEACHER accused of bullying his pregnant colleague claims he was reassuring her when he said his wife had been made redundant for taking maternity leave.

Peter Hogan, 49, head teacher of private school Loretto, is being investigated at an employment tribunal after admissions director Fiona Gordon lodged a complaint about his behaviour towards her after she announced her pregnancy.

Mrs Gordon, 41, from Edinburgh, told how Mr Hogan apparently said: “My wife was made redundant when she fell pregnant; it is a real pain when women go on maternity leave.”

She claims she was faced with sex discrimination after telling her boss she would need time off to have her baby, who is now 18 months old.

Ailsa Carmichael, representing on behalf of the £8,700-a-term school, said Mr Hogan elaborated on the statement in which he allegedly told Mrs Gordon “that will not happen here.”

Ms Carmichael said: “Mr Hogan continued on his speech to inform you that he was not annoyed by your pregnancy, in fact, what he actually told you was: ‘don’t worry that will not happen here – children are we teachers’ livelihood after all.’”

However, Mrs Gordon stands by her original claim that the head teacher was threatening her with redundancy, and that she was being discriminated against because of her pregnancy.

She said: “He would never have said that to me, because I am not a teacher as you say he was referring to me as, that is a complete mistake on his part and he has made it up.

“As soon as he mentioned the word redundant I left the room as quickly as possible, I wasn’t even sitting down, and believe me he did not elaborate at all.”

Mrs Gordon, who has worked at the school for nine years, claimed that Mr Hogan saw through his threats as her department was restructured while she took maternity leave and she returned to be told she had to re-apply for a more junior post with a salary £6,000 lower than she had been on.

She told the tribunal: “I was told I could apply for the position of registrar, which I see as a huge step down on the professional scale – it is a job I was doing 19 years ago at another school.

Mr Hogan was not present at the hearing, but is due to give evidence at the tribunal.