A FIREFIGHTER had to be airlifted to hospital this morning after the building he was working in collapsed on top of him.

Crews were battling a fire at Eyemouth Golf Club in the Borders when the roof of the building collapsed, injuring the firefighter.

The 44-year-old was rushed to Edinburgh Royal Infirmary by helicopter following the incident having suffered what was thought to be a broken leg.

He was later airlifted to the Southern General Hospital in Glasgow for specialist treatment.

The blaze started at around 5.30am on the outskirts of the small seaside town in one of the club’s sheds.

It is believed that the shed was were the green keeper’s equipment was stored, leading to emergency services wearing protective clothing to protect themselves from potential chemical threats.

The handyman from the clubhouse said that the only chemicals in the building would be fertiliser and fertilisers.

He said: “I got a call this morning saying there had been a fire and not to come in to work.

“The shed where the fire happened in where they keep all the machines for the grass, lawnmower and seeders and things.

“One of the machines is brand new a few weeks ago and the other are not that old. It must be thousands of pounds worth of damage.

“The only chemicals that would be kept in that building are fertiliser and pesticide powder, nothing liquid, but I guess they have to be careful.”

He added that the club were hosting a major tournament next week and needed the green to be up and running.

He said: “There’s a tournament starting on Monday, the Scottish Girls Championships and the green needs to be kept in order for that.

“Folk think it’s just cutting the grass, but the boys are out every day on the green keeping it up to standard.

“The boss was talking about sorting out hiring machines so we can keep going until new ones are bought.”

Although the flames were put out by 8.45am, fire and accident investigators stayed to secure the area.

Around 35 staff from Lothian and Borders Fire and Rescue were sent to the site to tackle the blaze, which isn’t thought to be suspicious. 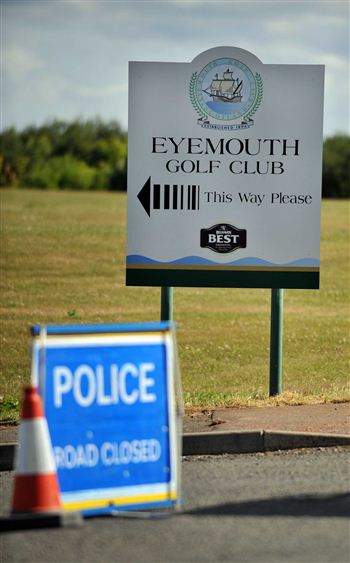 “The incident was a green keeper’s shed on fire with chemicals involved. Seven fire service vehicles attended from the local area and Edinburgh.

“During the course of fighting the fire, a firefighter has been injured when part of the building structure collapsed.

“The firefighter was attended to by the Scottish Ambulance Service before being taken to the Edinburgh Royal Infirmary by air ambulance.

“Details as to the extent of the firefighter’s injuries are unclear, but it is believed he has a broken leg.”

The building is leased to the golf club by Scottish Borders Council, who are working with the club to make sure the area is safe before it is opened up.

They are testing the debris for chemicals before opening up the golf course again.

Dr Eric Baijal, Joint Director of Public Health for NHS Borders and Scottish Borders Council, said: “We are advising members of the public to stay away from the golf course until the building has been made safe and the debris has been removed.

“Testing for possible chemical content is being carried out as a matter of course and a further update will be issued as soon as the results are available.

“I would stress that any risk to public health is extremely small given the location and contained nature of the incident.”