THE former face of Rangers TV has kicked off a bid to become Lord Alan Sugar’s new Apprentice in next year’s series of the award winning show. 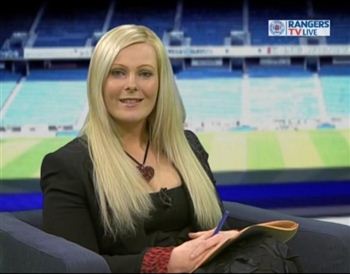 But the presenter is now auditioning for the hit show in another bid for fame.

Millions could now watch her battle it out with other hopefuls for the £250,000 prize – and a job with Lord Sugar.

Lindsey said she applied for her place on the show this week and has an audition in London.

Lindsey said: “I put the application in on Sunday just before the deadline and the next day I got an email asking me down to London for an audition.

“I go down on Saturday for my audition. It is a quick fire round of questions.”

Although many have been left rattled by Lord Sugar’s infamous “You’re fired” catchphrase and iconic finger pointing, Lindsey insists the tycoon holds no fear for her.

She said: “I think he is going to be a bit of pussycat.

“I’m just going to be honest with him and direct and I’m sure he will appreciate that – it is going to be an interesting head to head.

“If I don’t get through it will be an experience anyway.

“I have a background in marketing and in journalism so I am hoping the experience I have will stand out – if not they may just include me as the token Scot.

“To be honest I just think it will be a bit of fun.”

Lindsey has always been a big fan of the show and insists there is more to it than other fly-on-the-wall programmes.

She said: “It is really addictive and it is not like other reality television programmes – I think this has a bit of credibility.”

She was left devastated by the collapse of the broadcaster Setanta who screened Scottish Premier League games, as well as channels for both sides of the Old Firm.

Since then the former STV Borders reporter has been working for Real Radio, as well as launching her own online luxury magazine, Status, and a marketing company of the same name.

And Lindsey, from Denny, Stirlingshire, said she has caught the entrepreneurial bug.

She said: “I have launched a marketing company and the magazine and I have an exciting project coming out later this year, which I can’t really speak about just now.

“I have really caught the business bug and really enjoy mixing it with my media background.”

Series seven of the Bafta award winning show will be screened next year.