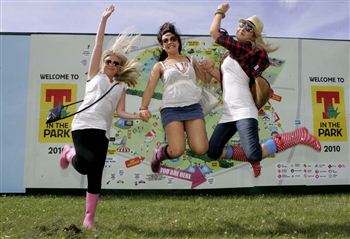 But there was no dampening of excitement yesterday as the first wave of 80,000 ticket holders kicked off this year’s event at Balado near Kinross.

Headliners included Muse, Faithless and the Black Eyed Peas, with hip hop legend Eminem due to play on the Main stage.

Kwaja Mahuh, 32, from Glasgow, had dressed to impress with his homemade Tennent’s hat and said he’d enjoy himself whatever the weather.

At his third T in the Park, Kwaja was still as excited as he was the first time.

He said: “I chose this instead of a holiday in the sun. Who needs sunshine when you’ve got beer and good bands?

“Rain makes T in the Park more fun, everyone clubs together and becomes friends.”

By evening the sun was again splitting the sky – as dark clouds cleared for a time ahead of predictions of more rain today. 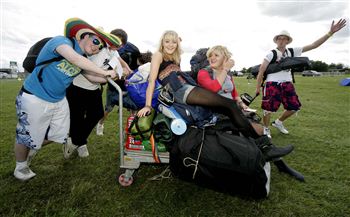 But the mud had already taken hold in the campsite where revellers trekked through it to get to the main arena.

As the sun started shining, waterproof jackets were thrown to one side and the spirits lifted.

But with more rain forecast for today (sat), the respite was short lived.

A Met Office spokeswoman said: “Tomorrow there will be rain in the morning which will continue into mid afternoon.

“Later in the afternoon the rain will become heavier. Heavy rain will continue into the evening and over night.

Experienced festival goers dragged sleds full of beer behind them as they made their way through the rain towards the campsite.

Music pumped out of speakers, giving them a taste of what was to come after they had navigated the queue snaking round the site.

With Fancy Dress Friday underway, one man was determined to win the contest.

William Wood, 25, from Cruden Bay in Aberdeenshire donned a blonde wig and blue bodysuit in an attempt to clinch the title.

He said: “I’m going to win the fancy dress competition – I’m dressed as ‘Let’s Get Physical’.

“I won it two years ago when as I came as naked man, I wasn’t naked but I looked naked. It was good.

“There’s 30 of us here for T this year and we’re going to have an amazing time.”

They mingled with campers dressed up for Fancy Dress Friday, many of who were ignoring the theme of Mad Hatter’s Tea Party.

Festival-goers dressed as Where’s Wally, the Queen of Hearts and even the Saltire.

And for one of the revellers it was more than just a music festival.

She said: “There’s just three of us come up but we’ve already made friends in the campsite.

“We arrived last night and have had a great time before the music even started.

“I can’t wait to see Calvin Harris, Black Eyed Peas, Eminem and Florence in the Machine.

“I can’t think of a better way to celebrate my birthday.”

Zoe Watt, 22, from Inverness, has travelled down in her friend’s car.

She said: “We’ve pitched our tent and are headed for the bar. We got a bit wet earlier on but we’re starting to dry off.

“It would be nice if it stayed like this but we’ll have fun anyway.

“I can’t wait to see the Black Eyed Peas and tomorrow we’ll be heading for the King Tut’s Wah Wah Tent – we’ll be there most of the day.

“It’s a great line up this year. We were coming anyway, but the bands playing made it even better.

She added: “I can’t wait for next year already.”

Danielle Malcolm, 17, and her boyfriend Sean Peoples, 22, were enjoying their first T in the Park together despite the weather.

The pair had travelled down from Kirkcaldy to camp over the weekend.

Danielle said: “It might be raining but I don’t care. We’re going to have a great time with each other.

“I’ve not been to a festival before. Sean has so I thought I would come with him and he could show me what it’s all about.”

Sean added: “I knew Danielle would join it. The campsite is really muddy.

“But we’ve got our wellies so it’s fine.”