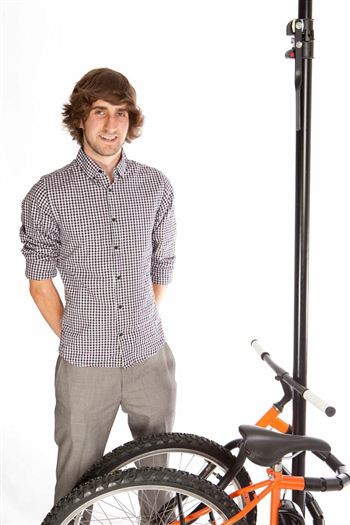 A SCOTTISH student has come up with a new invention that could make bike thefts a thing of the past.

Kevin Scott, from Mid Calder, West Lothian, has come up with the idea of a bendy bike which can be folded round lamp posts and locked on to itself.

When unlocked, the bike can then be snapped back into its rigid position and cyclists can carry on their journey as though on a normal bike.

He is now on the look-out for a company to help him develop and market the bike commercially.

He said: “I chose to address the area of security, and the design itself developed to use existing objects in the city, like lampposts and sign posts, instead of needing specialist installations by the council to lock onto.

“It’s an existing frame for the front and back section and the bendable section is made out of a series of glass-filled nylon sections.”

The bendy bike has received an enthusiastic response during its first public showing outside the university, at the New Designers exhibition in London’s Business Design Centre.

Kevin said: “It’s had a great reception, I won second place in the New Designers, and that was a bit of a surprise.”

He received £500 as his award, which he says will be invested in the bike’s development.

Due to graduate later this month, Kevin said he would love the chance to work full-time on the bike, and hopes a company will be willing to take it on with him.

Isobel Dennis, show director for the New Designers, said: “The potential for this idea is particularly exciting.

“For this reason, Kevin’s innovative product was singled out from the thousands of design graduates who are showing at the exhibition.”