A HEROIN addict caught with 57 bags of the drug tried to tell police he was dealing in chocolate.

Officers received a tip off that Kevin McHugh, 35, was supplying diamorphine from his home in Dalkeith last October. 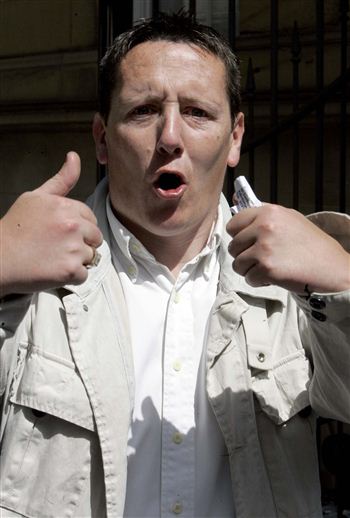 And when they raided his Midlothian home and found almost £600 of illegal substances, he told them: “That’s my chocolate.”?

Police were not fooled by his claim, and swiftly arrested McHugh on suspicion of dealing drugs.

He pleaded guilty today (Tue) at Edinburgh Sheriff Court to charges of possession and supply of the controlled Class A drug diamorphine.

Described as a heavy drug user, McHugh – who played up to the cameras outside court – claimed 40 of the ‘tenner’ bags were for his personal use.

But he admitted he planned to sell the remaining 17 to other known heroin users in his circle of friends.

Defence lawyer Graham Horsman told Sheriff Alastair Noble that his client had no intention of selling to anyone out with his group of acquaintances and that no new users would have been targeted.

Mr Horsman also stated that McHugh is keen to get help to get off the drugs.

He said: “Mr McHugh still has a significant drug problem. He is going to struggle to beat the problem without any support.”

Sheriff Noble told McHugh to come back to court in August for a drug treatment review.