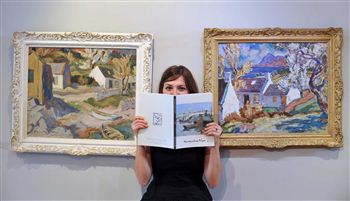 AN OVERLOOKED Scottish artist is getting a rare retrospective of his work starting tomorrow.

John Maclachlan Milne was a contemporary of the Scottish Colourists movement and was highly regarded by collectors of the day.

But he has since been forgotten and only one exhibition of his work has happened since his death.

Starting tomorrow, the collection of paintings from the Dundee-born artist will be held at the Bourne Fine Art gallery in Edinburgh.

Emily Walsh, director of the gallery said: “This is a long overdue tribute to a wonderful Scottish artist and only the second exhibition of his works since his death in 1957.

“His work has been, in my opinion, unfairly overlooked in the history of twentieth century Scottish art.

“This exhibition tells the story of a talented artist working in the circle of Scottish Colourists.

“We hope that sharing his paintings with a wider audience will reawaken people’s interest in this often forgotten painter.”

The artist left his home to fight on the Western Front during the First World War and he spent a lot of time in the country after the war.

In the 1920s he mixed with Peploe, Cadell and Duncan Grant and his reputation grew as his paintings of Mediterranean scenes became collectable.

Milne returned to Scotland at the start of WWII and settled on Arran where he started to concentrate his art on his new surroundings, capturing the scenes of the Western Isles.

The exhibition runs until Tuesday July 27 at Bourne Fine Art on Dundas Street.