Fire engine team gearing up for charity race to Mongolia 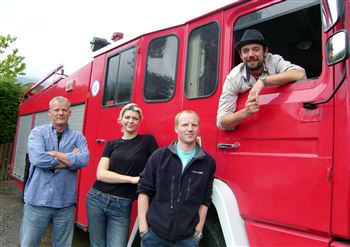 TWO adventurous Scots are gearing up to lead a seven-strong team of fundraisers across the world in a mad dash race to Mongolia aboard a bright red fire engine.

Steven Smith, 32, and step sister Kate Austin, 23, both from Portincaple near Helensburgh, are to head up the team ‘Monletsgolia’ on their 10,000 mile trek to raise cash primarily for Edinburgh-based Mercy Corps.

They will be joined by Jamie Clark, 31, a gardener from Helensburgh, and Colin Taylor, 44, a fireman from Garelochhead, along with Stuart Browne, 35, from Northern Ireland, Cameron Caine, 22, from Petersfield, and Matt Hamilton, 30, from New Jersey, USA.

The Mongol Rally starts at Goodwood race track in Chichester and ends in the Mongolian capital Ulaanbaatar, allowing entrants to plan their own route.

The team, who will not be using any satellite navigation on their trip, are still looking for additional members to join them on the ‘do it yourself’ fundraiser.

Steven Smith, a marine engineer, said: “We’re taking on the challenge in a 17 tonne, 1994 Dennis Saxon Fire Engine that until recently was being used as a ‘party engine’ for hen nights.

“Usually fire engines retired to this kind of work have the pumps and water tanks removed to make room for minibars and zebra print sofas, but thankfully this one has all its equipment intact.

“We’re hoping we can get it across Europe, then on to Russia and Kazakhstan, then cross the Mongolian Steppe and Southern Gobi desert to reach the Mongolian capital Ulaanbaatar, where – if we make it – we’ll donate the fire engine to the Mongolian authorities for them to use.”

The rally is like no other, as no help or support is offered along the way, and contestants are left completely to their own devices in the race across some treacherous terrains.

Every car in the race must have an engine no larger than one litre unless the team pays a penalty payable as an extra donation to the official charities.

However, full exemption is given for cars with comedy value, such as Monletsgolia’s big red fire engine.

The team will donate most of their funds raised to Mercy Corps, a charity which works amid disasters and conflicts to help people overcome the impossible, and the team also plan to give to Help for Heroes and The Christina Noble Children’s Foundation.

Mr Smith said: “It’ll be quite an adventure, and it’s great to be able to do this for charity.

“We need the people of Scotland to get behind us though, so we can raise as much as possible – we’re asking everyone to visit our website www.monletsgolia.info and make a donation.

“We also need lots of kit, so if there are any businesses out there who want to sponsor us, we’d be really pleased to hear from you.”

John Cunningham, director of fundraising at Mercy Corps in Edinburgh said: “We’re so pleased that team Monletsgolia are taking part in the Rally this year to raise money for our work helping the people of Mongolia.

“We’re based in Edinburgh but work across the world to help communities in need, so it’s great to see Steve and his team take on such a big challenge to raise funds for us.”