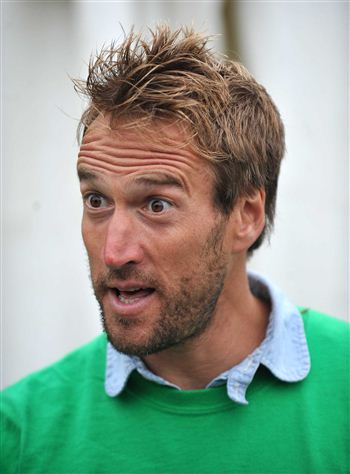 TV PRESENTER Ben Fogle today revealed the reason he keeps stretching himself is because he is still “chasing memories” of his time in the Outer Hebrides.

He said that the reason he keeps setting himself mammoth challenges is because he misses his time on Taransay, where he was marooned with 35 other people for the BBC show Castaway 2000.

The Country Tracks presenter was speaking ahead of his next expedition where he will cycle 3,000 miles from Canada to Mexico with friend and fellow adventurer James Cracknell.

And he said it was shaping up to be the hardest challenge he has done since his time on Taransay.

Ben said: “I would say this is the hardest challenge to date. It’s the one I’m most worried about.

“The first training session was when we took part in the Etape Caledonia.

“I came off my bike and broke my finger there and that was road bikes not mountain bikes so I didn’t get off to a good start and I’m a bit nervous about it.

“But I love a challenge.

“It’s 10 years since I was on Castaway and that was the ultimate challenge.

“I think I’m still chasing those memories of that incredible time.”

The duo will cycle 18 hours a day for four weeks, covering a whopping 180 miles a day.

Ben was in Edinburgh today to try and encourage people in urban areas to get out and enjoy the outdoors.

Nature Valley were giving away 2000 free lunches to people who sat and enjoyed the tented picnic to music being performed by a jazz band on St Andrews Square.

Ben said that it gave workers a well-earned break that they should take more often.

He added: “The idea is to get people in urban areas out of the office and into green spaces.

“We want to encourage people in cities to get out for their lunch break and enjoy all the green spaces in their city.

“We can all be slaves to our jobs and we end up not taking a break from it.

“The outdoors is good for the mind and the soul.”

Nature Valley have created a list of green places around Edinburgh where people can go and enjoy the outdoors.

It can be found at www.secretspots.co.uk/edinburgh.