POLICE are probing a mystery death after a man’s body was found in Fife over the weekend. 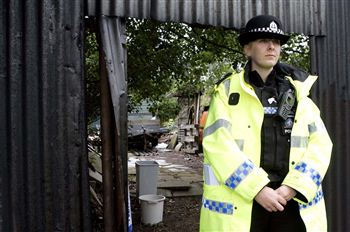 Hedi Rhouma, 33, was found in a wooded area behind his family home in Inverkeithing on Sunday.

Mr Rhouma was reported missing on Tuesday, July 13 after he disappeared from his home in the town’s Preston Crescent.

Police had cordoned off the area where the keep-fit enthusiast was found and were searching an area behind the end-terrace house.

His parents Nancy and Daoud, 55, were last night coming to terms with Mr Rhouma’s death at the home they shared with their son.

Speaking from the home a tearful Nancy said the family were too upset to talk.

But neighbour Patricia Sandy, 51 said she had known Mr Rhouma for around four years.

The housewife was visiting the site where the body was found to pay her respects and described him as a happy person.

Mrs Sandy said: “I saw him just before he went missing and he seemed fine.

“You always saw him out running, he kept very fit.

“He would always be laughing and he always stopped to say hello.

“The police took a statement from me on Sunday, they took statements from people who knew him.”

Fife Constabulary said the death is “unexplained” and have submitted a report to the local fiscal.

Detective Chief Inspector Colin Beattie said: “At this stage we are treating the death as unexplained and enquiries are continuing.

“A report has been submitted to the procurator fiscal at Dunfermline.”