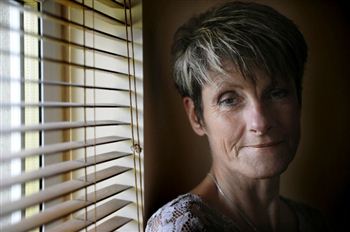 A SCOTTISH nurse was held hostage in her own bedroom for four hours after waking up to find a disturbed knifeman in her room.

Nightnurse Mary Johnston, 51 was barricaded inside her house by intruder Rafal Swiderski, 20, threatening to kill himself.

The terrified nurse managed to send a text message reading “HELP. PHONE POLICE” to a friend and tried to talk the raider out of using the knife.

She escaped after four hours, sneaking out the bedroom door while Swiderski was looking out the window at awaiting police.

He was eventually shot by officers with a taser stun-gun before being arrested.

Ms Johnston spoke of how she was trying to sleep between her night shifts at the Royal Infirmary of Edinburgh when she was woken by the sound of somebody entering her Broxburn home.

She said: “I had been on the night shift and I was woken about 11.45am by someone coming into the house.

“The next thing I knew this strange man had walked into my bedroom.

“He clearly thought someone was after him.”

It was only when Swiderski turned around to shove furniture against the bedroom door that Ms Johnston realised he had a knife.

She said: “He went into the kitchen and I heard him raking around and when he came back he pushed my bed and my treadmill against the door, and when he turned around I saw that he had a knife in the back of his trousers.

“He pulled the knife out and didn’t let go of it, and a few times he said he was going to stab himself with it.

“Then he told me to lift up the blinds so he could see out, and started pointing at nothing and shouting, “look, look.”

“I tried to calm him down by telling him that no one was there, but whenever I let go of the blinds he held the knife to me and told me to lift them up.” 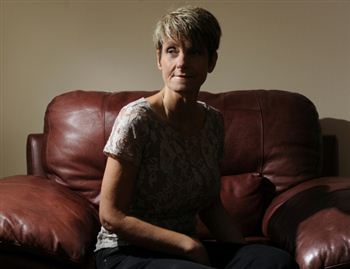 But when detectives did arrive, she said Swiderski began smashing up the bedroom.

Desperate to escape his increasingly violent behaviour, Ms Johnston dashed for safety from her house.

She said: “I could hear the police arrive outside.

“This just made him more agitated and he began jumping on the bed, on the chest of drawers and throwing ornaments around.

“The police were saying, “Rafal, Rafal, let the lady go. You don’t need her.”

“I managed to push the bed away from the door until it was just wide enough to squeeze through.

“He saw me and ran after me, but I made it out the front door and managed to pull it shut behind me.”

Police subdued the raider with a taser gun before taking him to Livingston’s St John’s Hospital where he was assessed and released.

Last Thursday at Livingston Sheriff Court Swiderski pled guilty to entering the house without invitation and brandishing a knife on May 22.

The case follows the shooting of Raoul Moat with a tasers, which raised fresh controversy about the use of stun guns.

She said: “If the police hadn’t tasered him, who knows what he would have done.”

Swiderski has been remanded in custody and will be sentenced next month.