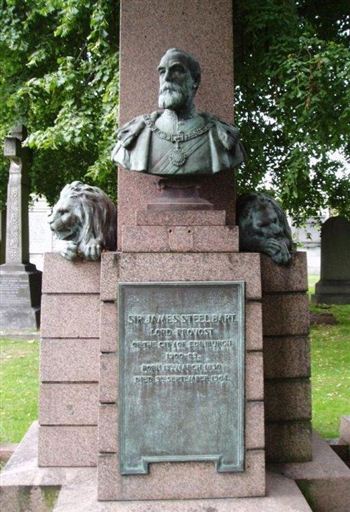 THIEVES have destroyed the grave of the Edinburgh provost responsible for the city’s original tram project.

Two large metal lion statues were taken from a monumental grave dedicated to Sir James Steel, a construction king of the late 19th Century who served as the city’s Lord Provost from 1900 to 1903.

It is believed crooks used a flatbed truck to take the 3.5ft-long lion sculptures out of the Dean Cemetery over the weekend.

Detectives said neighbours to the graveyard may have heard noisy cutting equipment being used and appealed for more information.

The raiders also took a large metal vase away from a separate grave.

Sir James was born in 1830 and established himself as one of the capital’s most successful building and quarry businessmen.

He was responsible for building many of the streets surrounding the city’s current Haymarket station.

City archivist Peter Clapham said records show Sir James was earning £80,000 per year at the end of the 1800s.

He said: “That I suppose is a good indication of how significant a person he was to the city.

“To be earning that kind of money in those days is incredible.

“The cable tramways were completed during his time as Lord Provost, replacing the horse-drawn tramway, so he was very highly regarded at the time.”

He died in September 1904, shortly after relinquishing his post.

He said: “Our records show Sir James Steel’s cremated remains are vaulted below.

“The grave is situated in a very prominent part of the cemetery so hopefully somebody has further information which will help police track them down.”

Police believe the sculptures were taken sometime between 4.55pm on 16 July and 4pm on July 18.

A force spokesperson said: “It must have been noisy when the metal fittings were being cut, and must have attracted some attention.

“We also believe a vehicle must have been used to transport the lions and the vase due to the size and weight of the items.

“In light of this, we would appeal for anyone who was in the area, and who may have seen something suspicious at the cemetery over the course of the weekend, to contact police.

“In addition, we would like to hear from anyone who may recognise or have seen these highly unusual items since they were stolen.”