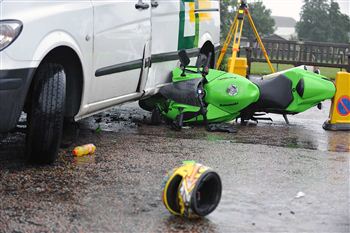 A MAN was taken to hospital with suspected head injuries after his motor bike struck a van in heavy rain.

The 30-year-old motorcyclist collided with the van shortly before 4pm today in the Leith area of Edinburgh and was taken by ambulance to the Edinburgh Royal Infirmary.

Links Gardens where the accident happened remained closed while police officers attended the scene, where a helmet could be seen lying on the road next to the dented van.

The extent of the man’s injuries was not yet known, but the accident left what appeared to be the impression of his body crushed into the side of the white coloured van.

It was believed the van driver escaped unhurt but the green Kawasaki motorcycle was badly damaged and left partly trapped underneath. 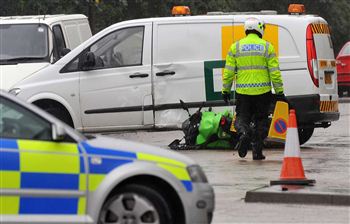 A spokeswoman from Lothian and Borders Police said: “We were called to Links Gardens at the junction of Salamander Place, after a motorcycle hit a van just before 4pm.

“The driver of the motorcycle sustained serious injuries but the extent of these are not yet known.

“The cause of the accident is unknown, but we are not ruling out the heavy downpours of rain causing slippery road surfaces.

“Drivers should take car when driving in the rain, and remember to alter their stopping distances accordingly.”

A Scottish Ambulance spokeswoman said: “An ambulance crew took the man to the Edinburgh Royal Infirmary, where he is being treated for head injuries.

“The van driver was not hurt in the accident and did not need medical attention.”