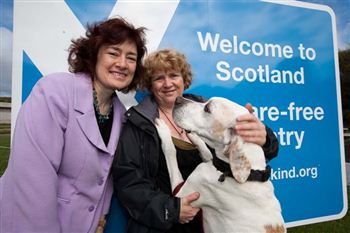 A WOMAN whose dog was caught in a vicious snare has joined growing calls for Scotland to lead the way in banning the deadly traps.

Jill Flye’s seven year-old English Pointer Monty was “yelping in pain” when he got caught in a trap on a public path.

After helping her distressed pet out of the snare, she said she was even more shocked to find out they were entirely legal in Scotland.

Now she is teaming up with MSPs in a bid to gather support before the issue is debated in the Scottish Parliament later this year.

Jill showed Monty’s injuries to Labour MSP Sarah Boyack outside the Holyrood building today, where the Advocates for Animals charity revealed a survey claiming 77 per-cent of Scots would back a ban.

The campaign is currently supported by Scottish Labour members, along with SNP backbencher Christine Grahame and Robin Harper of the Greens.

The Scottish Government insists snaring is “an essential tool for pest and predator control.”

Former rescue dog Monty made a full recovery from his ordeal with a trap near Winchburgh in West Lothian, but owner Jill, 48, feared for his life at the time.

The SCVO worker said: “I got him a year before the accident in 2007 and he was very familiar with the walk along the Forth Canal.

“It’s a path used by a lot of dog walkers, cyclists and children play on so I had no idea the snare would be so close to the path.

“It was hidden on the very edge of some woods which weren’t sealed off and there were no notices to warn of any danger.

“He was slightly ahead of me when I heard a huge scream from him and I knew he was in trouble, yelping in pain.

“I was shocked to find this thin metal noose around his right front leg because I didn’t know that we had them in Scotland and that you could just come across them like that.

“It was just as well I managed to get it loose in time because it had taken the skin off his leg and was starting to swell up and had I not found him I’m not sure he’d be here today.”

Jill’s horror was compounded when she carried out some research into the legality of snares in Scotland.

She said it was “deeply concerning” to know whoever set the trap would never be prosecuted for the pain her dog suffered.

“The deeply concerning thing is I have never been able to find out who was responsible for what happened to my dog so I wanted to know whether anybody was doing anything about snares.

“I hope the MSPs do get enough support to see the ban through parliament because snares are an absolutely inhumane way to treat any living being.”

After inspecting Monty’s scars yesterday, Sarah Boyack urged pet owners to contact politicians to ensure they know the full extent of any problems across Scotland.

Otherwise, she fears MSPs will only have a “theoretical discussion” and the campaign will fail.

She said: “Although we’ve had regulations passed in parliament there are clearly still problems out there and pets and wildlife being indiscriminately caught.

“The Scottish Parliament needs to look at this again if 77 per-cent of the population want something done about this.

“They need to contact their local MSPs and tell them how strongly they feel about this issue so that when it comes up again in parliament we are having a discussion where people have actually spoken to their MSPs and we know what’s actually happening out that, not a theoretical discussion.”

An amendment to the new Wildlife and Natural Environment Bill, introduced last month, is to be tabled in September.


The SNP’s Christine Grahame, who supports a ban, said: “Snares may be cheap low-maintenance traps, but the suffering that they cause to wild animals, farmed animals and pets is far too high a price to pay for their continued use.”

Advocates for Animals’ policy director, Libby Anderson, said she would be pressing ministers to adopt a full ban.

The charity found 788 out of 1,019 adults polled between March and April want snares outlawed.

She said: “The vast majority of people in Scotland would welcome our country becoming free of snares, which are outdated, inhumane and indiscriminate traps.

“Our politicians must listen to public opinion and seize this opportunity to bring our laws up-to-date by ending the use of snares and leading the way for the rest of the UK.”

But the Scottish Government said compulsory training for snare setting would be enough.

They said: “The Scottish Government carried out a thorough review and concluded that snaring should be retained as an essential tool for pest and predator control.

“Proposals in the Wildlife and Natural Environment Bill will see improved standards in the setting of snares as snaring operators will have to undertake compulsory training.

“Technical changes to the snare will also mean that non-target species will be able to be released unharmed.”