COPS have launched a desperate hunt to identify Scotland’s own Piano Man.

The mystery man was found lying in the middle of an Edinburgh street in the pouring rain on Wednesday night by a taxi driver.

Now recovering from a head injury in hospital, he cannot remember who he is, where he lives and has no clue what happened to him.

Detectives compared the case to German Andreas Grassl, dubbed the Piano Man after being found wandering aimlessly near a beach in Kent in 2005.

Officers in the Scottish capital have put out a call to the force which dealt with the Piano Man case, hoping their advice can help identify the man, who has a bruise above his forehead.

While Grassl was later reported to have been a fraud and made his story up, the cop leading the Edinburgh case insists there is no doubting the authenticity of the new mystery.

Detective Sergeant Dave Pinkney said: “This gentleman is very concerned about his memory loss and his injuries are consistent with that.

“He has had a total loss of memory so has no idea why he was lying in the road at 11.20pm, what his name is or where he is from.

“He knows what a table or a car is but other than the basics he is very confused.

“Due to my inquisitive nature I have been looking into the Piano Man case and we’re pretty sure our guy is not faking it.

“But the call has already gone in to speak to other forces who have dealt with similar cases so we can get their guidance.”

Police described him as being of Asian or Middle Eastern appearance, in his early 20s, 5ft 3ins tall, with a slim build, short dark hair, and a Scottish accent possibly from West Lothian.

He has a tribal tattoo on his upper right arm with three dragonheads in a circular pattern.

Police say he may have been assaulted or robbed, having been found in possession of just £12 in cash, a lighter and cigarettes.

When found he was wearing a navy blue rain jacket, a black short-sleeved casual shirt, dark blue jeans with “G-KING” on the rear pocket, and black velcro trainers.

As well as speaking to neighbours in Northumberland Street, where he was found, a call has been put out to other forces across the UK via the National Police Improvement Agency (NPIA).

DS Pinkney said: “It is very unusual and I have never seen anything like this before in my time, so we are using the NPIA to see if any good practice can be shared with us in terms of how to solve this.

“Our biggest hope is that someone who knows him or a member of the public who saw what happened will contact us.

“He comes across as a genuinely nice young man but as time goes on he is getting more and more worried about himself.” 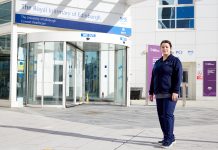