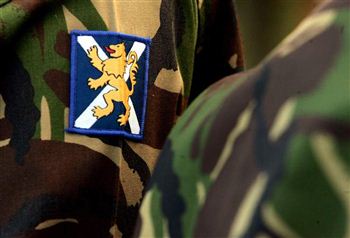 ANOTHER 400 British troops will be killed in Afghanistan according to a former SAS deputy commander.

Clive Fairweather warns that by the time UK forces pull out of the country in 2014, they could have lost many more due to rising numbers of seriously wounded soldiers.

The defence analyst spoke out after Greenock solider Lance Corporal Stephen Monkhouse, 28, died along with Corporal Matthew Stenton, 23, while trying to rescue a wounded comrade.

The pair were serving in the country’s Helmand province, where UK troops will stop fighting by 2014 according to the latest statement by defence secretary Liam Fox.

By then, Mr Fairweather fears Taliban fighters will have claimed hundreds more lives.

“It’s not unrealistic to expect up to 400 more UK deaths if present troop dispositions are maintained.”

The majority of the human tragedies during the conflict have been due to roadside improvised explosive devices.

Mr Fairweather believes casualty rates will remain the same until the timetable for withdrawal, laid out by the new UK Government, comes into force.

He said: “After nearly nine years of fighting it may take much longer to see the positive effects of the surge, by which time Britain will be starting to leave.

“By leaving Sangin, the scene of a bloody combat, we may cut down on the appalling casualty rate.

“But no matter where our troops are stationed, the Taliban will continue to plant roadside bombs.

“Indeed they may try to increase the casualty rate to show it was they who pushed us out of the country.”

Combat Stress, which treats ex-service personnel for post traumatic stress, is bracing itself for a steady stream of patients over the next decade.

The military charity, which has a treatment centre at Hollybush House in Ayr, says it needs to raise £31 million over the next three years to treat those who turn to them for help.

A spokesperson for the organisation said: “We are expecting many more casualties from Iraq and Afghanistan so we are trying to raise £31 million across the UK to fund outreach teams to see people in their own communities.

“So far we have raised £16 million and we get great support from the Scottish Government, which contributes 60 per-cent of Hollybush running costs and funded two outreach teams.”