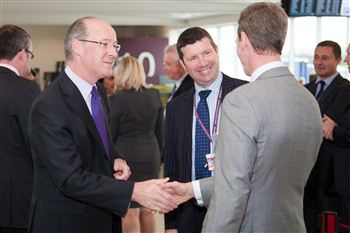 The new departure lounge, which cost over £40m and took two years to extend, has doubled the size of the security hall and created space for new retail facilities, restaurants and seating.

The overhaul means the airport will be able to cope with increased passenger numbers of up to 13 million, while lessening the amount of time people have to spend going through security.

Cabinet Secretary for Finance and Sustainable Growth, John Swinney, was there to open the new lounge, and said he thought the expansion of the would mean a significant contribution to the Scottish economy.

He said: “This has already created 150 new jobs, and we welcome the private investment that has been made here.

“Apart from the employment opportunities, there is also exceptional retail space for shops and businesses – which will have a significant and positive effect on both the economies of Edinburgh and Scotland.”

However, Mr Swinney refused to be pulled in to the controversial debate over the introduction of a £1 drop-off charge at Edinburgh Airport, which bosses are said to be planning to introduce for vehicles dropping off holidaymakers at the terminal.

Mr Swinney said: “The drop-off charge issue is a matter for BA; we’ve made our position very clear.

“What we welcome out of this is the contribution Edinburgh Airport can make to the Scottish economy, which will be very significant during a challenging economic time.” 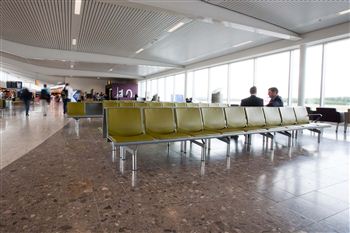 Gordon Dewar, outgoing managing director at the airport, said: “It’s brilliant to have this fantastic facility open, as it shows off a culmination of more than two years of hard work.

“There has been next to no disruption to existing passengers during the time the work has been going on – I’m sure many of them didn’t even notice anything was being carried out.”

“In the past year we have been able to open up 42 new routes to and from the airport, and this extension means we can continue to link Scotland with the rest of the world.”