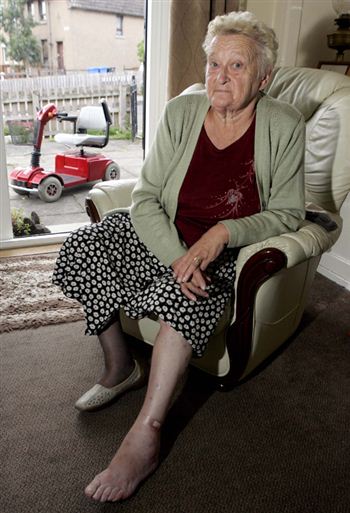 A FURIOUS pensioner is suing her local council after one of its trucks destroyed her mobility scooter.

Nancy Smith, 74, was making her way from her home in Millgate, Winchburgh, when the cleaning truck reversed into her scooter.

She feared she would be crushed to death by the comparatively huge yellow truck, which left her scooter irreparably damaged.

She has since filed a legal claim against West Lothian Council for her injuries and loss of mobility following the scooter smash.

She said: “There was another lorry on the pavement I had to drive onto the road.

“I saw the truck at first and it was stationary but all of a sudden it started reversing and hit me.

“It went over the front of the scooter and into my leg, leaving me with terrible bruising.

“The driver got out to see what had happened and said that he thought he had run over a crisp packet.

“The scooter was badly damaged and as a result I’ve been housebound now for five weeks.

“It was terrifying and I thought I was going to die.

“I keep having panic attacks and waking up in the middle of the night seeing lorries coming towards me.? 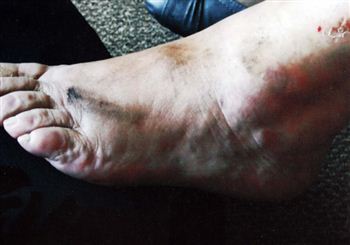 Nancy, who has two sons, James and Douglas, and five grandchildren, was left unable to travel without a mobility scooter after she fractured her hip on a slippery pavement three years ago.

West Lothian council have issued her with a temporary replacement while her claim is being processed.

The council immediately admitted liability for the accident, and said that they were looking to resolve her claim as quickly as possible.

A West Lothian Council spokesperson said: “We have apologised to Ms Smith for this unfortunate accident.

“Ms Smith’s claim is being handled by Quantum Claims, who are acting on her behalf as her legal agents.

“On 22 July, our insurer asked Quantum Claims for a repair estimate for Ms Smith’s mobility scooter, which they have not yet supplied.

“This has resulted in a delay in processing Ms Smith’s claim.

“However, once our insurers have received the repair estimate from Quantum Claims, they will be able to process the claim as quickly as possible.”

Nancy, who also has a sore back, neck and fingers following the crash, added that she was promised a replacement scooter the day the after the incident happened.

She said: “I think that as soon as the council found out that the press would be involved, they hurried things up.

“So now I’ve got this replacement hire scooter, but I’m scared to use it because it’s a newer model and I’m worried something might happen again.

“It’s terrible having to rely on other people when you’re so used to being active.”

Nancy, whose husband James died in 2006, added: “You don’t know where to turn to when you’re on your own.”