All hands on deck at thriving limb-ovators Touch Bionics 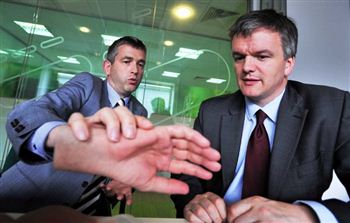 SCOTTISH Secretary Michael Moore got to grips with some fake hands today as he visited the country’s most successful prosthetic limb company.

The Lib Dem MP was treated to a tour around Livingston’s Touch Bionics, which specialises in making lifelike and functional hands for patients with lost limbs.

He said he wasn’t surprised at last month’s announcement that the firm had been named Europe’s most innovative company of the year at the 2010 International Business Awards.

He said: “I think the work they are doing here is absolutely amazing, there is no other company as far developed as this one.

“They send their products worldwide, with a main market in the USA.

“There is something to be said for that, and what it is bringing to the Scottish economy is fantastic.”

Touch Bionics employs a staff of 35 at their West Lothian base and a further 80 over in the USA where they also have a facility.

Last month’s award win followed a string of other after launching their most recent product, the iLIMB pulse, a newer version of their state of the art iLIMB bionic hand.

Stuart Mead, chief executive of the company, said: “We try to make the facility as different to a hospital environment as possible, because our patients are not sick when we come here.

“After they have had consultations with specialists they come and spend a week here being fitted for a hand and being taught how to adapt to it by a physiotherapist.

“We make sure that by the time they leave, the patient feels comfortable with their new limb.”

Mr Mead noted that his company is the leading competitor on the market, but said they knew of at least one other bionic company that may become competition in the future.

He said: “It is not something we worry about, as when we look at them we see that they are at the same stage as us three years ago when Touch Bionics was first launched.

“The way we will keep ahead will be to carry on developing our products and continue to come up with innovator ideas.”

Student hopes his design is everybody’s cup of tea