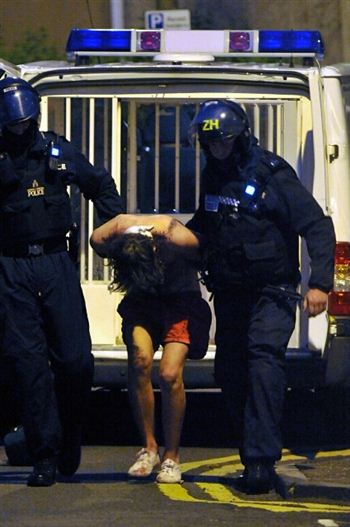 A MAN who sparked a four-hour stand-off with armed police after a knife rampage has been ordered to do 80 hours of community service.

Denim MacLeod, 28, left the walls of his girlfriend’s flat dripping with blood after cutting himself with a serrated kitchen knife.

A neighbour fled the flat in terror but his brave girlfriend stayed with him as police tried to coax him out.

At one point he lunged at the officers with the knife, but they managed to keep their cool and persuade the “agitated” MacLeod to give himself up and he was arrested and treated for his self-inflicted wounds.

After a spell in custody after last August’s stand-off a sheriff told MacLeod today he had been “punished substantially already.”

He was also put on probation for 12 months.

Armed police, dog handlers and the fire brigade were called in, but Miss Cairney told police she was uninjured and there voluntarily.

Prosecutor Gerard Drugan said MacLeod was at home with his girlfriend and a neighbour on 25 August when he began acting strangely at around 5.30pm.

The neighbour phoned police after noticing MacLeod was covered in blood.

Mr Drugan said: “When they pushed open the door it was at that juncture MacLeod ran at the officers and brandished the knife.

“There appeared to be blood on the floor and walls.

“He was in a highly agitated state.

“He was jumping up and down.

“Miss Cairney left the flat and was not injured and said that she had only remained there voluntarily.”

Paramedics also attended to provide medical care to the blade-wielding MacLeod once he was subdued.

Officers removed a hoard of serrated knives from the flat after the incident, but were unable to identify which one had been used to threaten them.

He previously admitted a breach of the peace at Edinburgh Sheriff Court, as well as a guilty plea to having a hammer outside Gladstones Bar in Edinburgh’s Mill Lane on February 6 last year.

Speaking in court yesterday, MacLeod’s solicitor Niall McCluskey said: “We have received a report from a consultant forensic psychologist in relation to Mr MacLeod’s case.”

Sheriff James Scott stopped him and said: “Is Mr MacLeod fit for probation and community service?”

Mr McCluskey confirmed that he was.

Passing sentence, Sheriff Scott said; “Given the circumstances, and the content of the reports, the court is prepared to sentence Mr Macleod to 12 months probation and 80 hours community service.

“It seems that Mr MacLeod has been punished substantially already.”