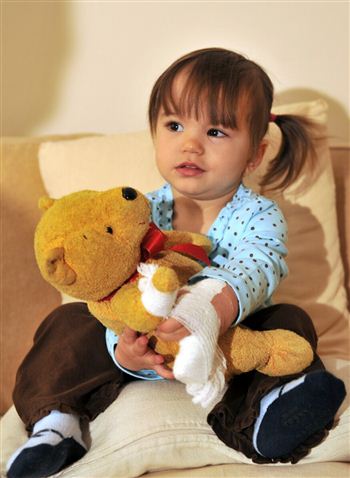 A TODDLER who trapped her pinky finger in a door had to be rescued by firemen after she locked herself, mum and baby brother in a bedroom.

Elspeth McDiarmid, who turns two tomorrow, went to say hello to her mum, Christina, as she breastfed two-week-old Archie in their home at Easter Road, Edinburgh.

But, Mrs McDiarmid said, Elspeth somehow managed to get her little finger completely stuck as she tried to close the door, leaving her mum unable to open or close it to free her.

Mrs McDiarmid, 28, said: “She was howling, I was completely stuck, and my son was on the bed because I’d been calmly breastfeeding him when she came in.

“She was in a lot of pain, every time I tried to move her finger up or down her legs would shake.”
Elspeth’s gran, Maria Hansen, was visiting from the US when the incident happened on Wednesday morning, and was trapped on the other side of the door, helpless.

She managed to pass a bottle of oil to her daughter through a tiny gap in order to try and ease the finger free, but their plan did not work.

Mrs McDiarmid said: “My mum was going a bit mental, and Archie was getting a little bit grumpy, but thankfully I wasn’t too wound up, I was telling everyone to calm down.

But – after trying everything they could think of – Mrs McDiarmid called 999 to seek help and soon after a team of firefighters came to their aid.

She said the crew shone a light through the door to see exactly where the little girl’s finger was.

The mum-of-two said: “Three of them lifted the door up a bit and pulled it away from the hinges.

“It was just enough to pull it away from her finger, which came out and she was really howling – it was really bent.”

After being taken by ambulance to the Royal Hospital for Sick Children, Edinburgh, an X-ray showed Elspeth has sustained a greenstick fracture – which is common in young children as bones are still soft and pliable.

The two-year-old is now at home recovering, and gearing up for her birthday party tomorrow.

Her mum said she was very grateful to the paramedics and hospital staff, but in particular to Elspeth’s rescuers.

She said: “It only took them three minutes to get here – the 999 woman heard Elspeth howling in the background, I was saying ‘everything’s fine, I don’t want to be one of those overprotective mothers, but I can’t get her finger out.’

“The guys were absolutely brilliant, the firemen were really lovely, trying to make her laugh.”

A spokeswoman for the Lothian and Borders Fire and Rescue said: “We were more than happy to assist and it was obviously quite uncomfortable for Elspeth, but we were able to help release her fingers.

“We’re delighted to hear that all is well and she’s making a good recovery.”

Blow for Hibs as experienced defender is ruled out until December