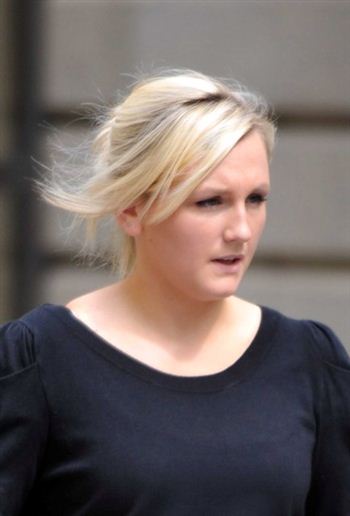 A HAIRDRESSER who smashed another girl in the face with a glass on a nightclub dancefloor claimed she only meant to pour a drink over her head.

Ashleigh Drysdale, 17, was in Stereo nightclub in Edinburgh when Lisa Golder bumped in to one her friends.

The pair started arguing and Drysdale went to throw her drink over 20-year-old Ms Golder.

Instead she let go of the glass and it smashed in the victim’s face, leaving her needing eight stitches and a permanently scarred.

Today at Edinburgh Sheriff Court, Drysdale pled guilty to assaulting Ms Golder to her injury and permanent disfigurement on January 31 this year.

Depute fiscal Ruth Ross-Davies told the court how the argument led to violence.

“This incident appears to have kicked off on the dance floor itself and it would appear that the trigger for it was some suggestion that Ms Golder had bumped into one of Ms Drysdale’s friends.

“Ms Drysdale took great exception to this and it led to a verbal argument which escalated to the point where Ms Drysdale threw the contents of the glass she had in her hand in to Ms Golder’s face deliberately.

“This glass struck Ms Golder in the face and caused Ms Golder injury as a result of the cut glass.

“It left her with lacerations on her face near to her left eye which will leave a permanent scar.”

Bar staff at the club on King Stables Road in Edinburgh saw that Ms Golder was bleeding and called police and paramedics.

Ms Golder was taken to Edinburgh Royal Infirmary after the attack where she was given eight stitches for the cut on her face.

This evening at her home in the Stenhouse area of Edinburgh Ms Golder said she didn’t want to talk about the attack.

She said: “I just want to forget about her and everything that happened.”

Drysdale was stony faced as her lawyer Cameron Tait told the court that she never meant to cause injury.

He told the court: “Her initial intention had been to throw the remnants of a drink at the complainer.

“She never intended to hurt her.

“She was of course too young to be in these premises in the first place.

“She hadn’t told her parents where she was going to be that night.

“Somebody from her work had handed her a passport so if she was challenged she would have something to show.”

He added that Drysdale had been “shocked” when she realised how bad the injuries Ms Golder sustained were.

Mr Tait added: “She was genuinely surprised to see the extent of the mark on her face.”

Sheriff Frank Crowe deferred sentence until the end of the month for reports.