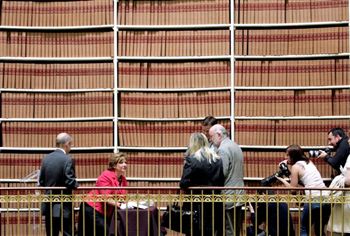 A LETTER of “huge significance” to the understanding of the life of Robert Burns was unveiled today.

Dated 14 July, 1796 – a week before the Scottish poet died – the letter tells how Burns was “reduced and shattered” during the final days of his life.

It was written by Burns’ superior officer, John Mitchell, to the Commissioner of Excise in Dumfries, where he worked prior to his death aged just 37.

The letter goes on display to the public on Monday at West Register House in Edinburgh.

It describes how the poet made journeys to Dumfries to collect his salary exactly a week before his death.

And – despite his ill health – the letter states that Burns’ “wit and humour remained”.

In the letter Burns is quoted by Mr Mitchell as saying: “I’m only 36, 10 of which only I have been in the world and, in that time, all I shall say, my good sir, I have not been idle.”

The poet was in fact 37-years-old, and he was referring to the 10 years since his poems were first published in Kilmarnock.

Culture Secretary Fiona Hyslop visited the archives to see the letter and said it was a tremendous discovery.

She said: “This is a once in a lifetime find, uncovering details about the final days of one of Scotland’s most famous sons and our national bard, Robert Burns.

“Undertaking this journey in what must have been a fragile state tells us something of the spirit of the man.

“I am sure there will be great interest in this find, from Burns enthusiasts and from those whose interest has been sparked by last year’s celebration of the 250th anniversary of the great man’s birth.”

David Brown, head of collections development at the National Archives of Scotland, found the letter and said it was the sort of find archivists always hoped was “just around the corner”.

He said: “The letter is of huge significance to our understanding of the life of Robert Burns.

“We anticipate much interest when the document goes on display next week as the centre piece of our exhibition.”