ONE of the world’s oldest known fire engines will be star of an Open Day being held in Edinburgh on Saturday.

The vehicle dates back to 1806 and belonged to James Braidwood who founded the Edinburgh Fire Brigade before going on to become known around the world as the ‘Father of Firefighting’.

Braidwood established the brigade in 1824 and almost immediately helped earn its spurs during the Great Fire of Edinburgh that same year. 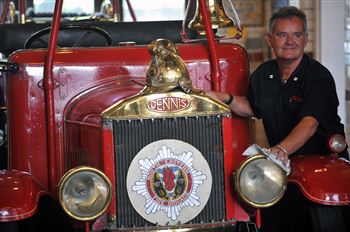 Some 400 homes were destroyed after a blaze broke out in a printer’s shop in the High Street, raging for three days and killing 13 people including two recruits to the newly formed service.

A child was among those who died, crushed under the wheels of a fire tender.

The Tron Kirk and offices of The Cournant Newspaper were two of the buildings to perish in the blaze which started on November 15 at Kirkwood’s Workshop at the head of Old Assembly Close.

Braidwood was just 24 years old at the time, but while mistakes were admitted, lessons were learned through the experience of the drama.

He was praised in reports from the time for retrieving two barrels of gun powder from an ironmonger’s to prevent an explosion.

He eventually died on the front line, trapped under a collapsed wall near London Bridge during the great Tooley Street fire of 1861.

Edinburgh Fire Brigade has since evolved into what has become Lothian & Borders Fire & Rescue Service.

Artefacts from the fledgling operations are among those which will be on display at the open day for the Museum of Fire at their HQ on Lauriston Place.

From the 1400s ‘cleikes of iron’ once used to pull burning that from the roof of Edinburgh Castle are on show, along with other vehicles, uniforms and helmets across the ages.

Horse drawn, steam driven, motorised and manual pumps are among the display while 12 modern tenders will also be on show.

The oldest fire tender on show dates from 1806.

The four-man manual hand-pump from Duns was commissioned in 1804 and paid for by public subscription.

It took locals two years to save up enough money to purchase the pump at a price of 75 guineas.

The original records in the Brigade Library show the names of contributors and how much they gave to the fund for the machine now known as a “Parish pump”.

Under the Parish Act of 1708, each parish was responsible for dealing with fires within their boundary.

Although now fitted with canvas hose, originally leather riveted hose would have been used, a length of which is in the pump.

This pump was found dilapidated in a farmer’s barn and brought to Edinburgh for restoration.

The open day – between 10am and 4pm – also tells the story of how firefighters were once required to grow beards which they rolled up into their mouths to act as filter, earning them the name smoke eaters,

Honorary Curator of the Museum and past Assistant Firemaster, Ian McMurtrie said:

“The Museum is a mine of fantastic historic fire memorabilia.

“We have vehicles such as fire engines dating back as early as 1806 and items belonging to James Braidwood, the ‘Father of Firefighting’ and the founder of Edinburgh Fire Brigade, the first municipal brigade.

“Although the museum normally welcomes visitors during weekdays, the open day is a great opportunity for members of the public to drop in and learn about the vibrant history of this vital service.”

It is currently working through a review programme aimed at identifying possible areas for savings, which is approved, would have to be implemented by its newly appointed fire chief Jimmy Campbell.