Tragic Riggi children "came from the most loving family" 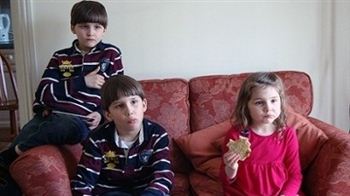 For 13 years Theresa and Pasquale Riggi had called Skene near Aberdeen home, sharing a cottage in the Scottish oil capital.

They had upped sticks from Colorado and California so Pasquale could start working for oil giants Shell.

Their twin boys Gianluca and Augustino, eight, with their impish shock of dark haired loved dinosaurs.

Their little sister Cecilia, five, adored Barbie dolls and playing at Princess with their friends.

To the outside world they were happy, go-lucky children, doted on by their parents.

But those closest to their 46-year-old mum revealed yesterday that a simmering row over education helped drive them apart and may have been the catalyst for the terrible events which unfolded in Edinburgh.

Amber Sebold, 27, from Peterhead, was left in “complete shock” when she woke up to reports that Theresa’s children were dead and she was in hospital to face questioning by police over the deaths.

She said the Riggi children had come from “the most loving family home you could imagine”.

But she admitted the one dispute that drove a wedge between them that she knew of, was over the home-schooling of their three children.

Amber, whose husband Aaron, 33, also works in the oil industry, had met Theresa through a home-schooling group in Aberdeen where both families lived.

She told of a deep bond between the two families with both sets of sons and daughters sharing a love for dinosaurs and princesses.

Audibly still shaken by the ordeal, Amber said she felt she had a responsibility to pay tribute to the young victims.

She said: “Obviously Pasquale and Theresa had their issues and home schooling was part of that but I tried to keep out of that.

“I would have never in a million years thought she would have hurt them.

“Her whole world revolved around them and having them in the house and she would do anything to make them happy.

“And the times I saw Pasquale he seemed to be a very loving father as well.

“Just can’t think what must have happened and there’s no way I will speculate about it because we just don’t know the truth yet.””

Amber’s children Cora, six, Calvin, five and 14-month-old Maia would even have sleepovers at the Riggi household.

She said the twin boys loved to wear the same clothes and sharing their toys with each other and her own children.

They were left “devastated” when Amber broke the news that they would never see their friends again.

She said: “I felt I just had to tell them the truth before they found out any other way.

“I told them they were in an accident and that we don’t really know what happened yet.

“I spared them the details but still had to tell them the truth, because although our TV has no signal they are starting to read and they might see Austin, Luca and Cecilia’s pictures in the papers.

“I told them today during a day out and they cried all the way home, which was about 40 miles.

“I am still in shock because they were extremely happy kids; really into dinosaurs and princesses just as mine are.

“Cecilia and my girl Cora would share dollies and dress up as princesses together when they played.

“I’ve got a one year-old baby who the twins and Cecilia just loved to be around, talk to and help to play.

Amber emailed other members of the local home schooling group early this morning in a bid to try and stop any rumours getting out of control.

She added: “All the other mums here will be shocked because Theresa and her kids were really gentle people.

“You couldn’t imagine any of them hurting a fly.

“They were not the kind of kids that would hit when they were mad. Theresa was the same.”

“I knew Theresa really well – at least I thought I did.”