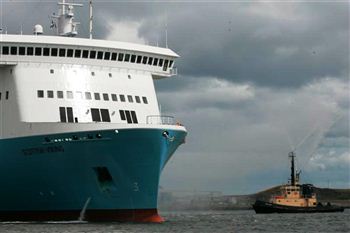 A DESPERATE search has resumed for a missing fisherman whose tiny boat was hit by a 27,000 tonne ferry.

The Newcastle-based Homeland trawler sank after a smash with the huge Belgium-bound Norfolkline Scottish Viking three and a half miles off St Abbs at the Berwick coast.

One crewman was plucked from the water by fishermen from the Good Fellowship, which put out the initial call to the Coastguard at 5.50pm on Thursday.

He was said to be shaken by the ordeal but did not need medical attention.

The hunt for his colleague – involving 15 volunteer boats, four RNLI Lifeboats and a rescue chopper from RAF Boulmer – was stood down at 11.20pm due to the darkness.

Some volunteer vessels stayed out through the night and were rejoined 4.30am by RNLI Lifeboat crews from St Abbs, Eyemouth Dunbar and Berwick.

By 8am on Friday 24 boats were meticulously scouring a 20sq-mile area by lining up and repeatedly sailing north then south.

They found debris from the sunken vessel

A Forth Coastguard spokesman said: “The missing man’s position is purely tidal influenced and we think he is caught in a dynamic part where sometimes it moves north and other times south.

“We are onto our fourth search area and there is an overlap in every search.

“The up-side is that conditions could not be better, there is good visibility and the water is calm.

“We are doing everything we can and the local response to help has been phenomenal from local fishermen.”

The extensive search will continue until Forth Coastguard chiefs decide the area has been well searched.

The Viking, which sails three times a week between Fife and Zeebrugge, continued its journey after stopping for four hours.