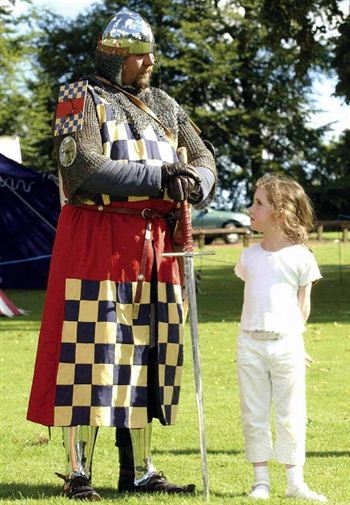 SCOTLAND’S children know more about celebrities like Cheryl Cole than they do national heroes according to new research.

A poll of 1,000 primary school kids showed that 91 per-cent of them recognised the X Factor judge, but just 28 per-cent were able to name William Wallace.

The group behind the study are blaming the education system for the lack of knowledge – saying students need to spend more time experiencing the subject.

The children, aged between nine and 11, were asked to identify the two famous figures at various events during the year.

While Cheryl Cole was instantly recognisable to most, Wallace was a lot harder for the schoolkids to name.

Now a medieval history group is offering free lessons to kids so they can learn more about Scottish history.

George Topp, an organiser of Lanark’s Festival of History, said: “Too much focus on core subjects at the expense of history deprives children from a full and rounded education.

“We find that when children are encouraged to learn about history they can quickly become fascinated and many prefer watching battle re-enactments and experiencing the sights, sounds and smells of history than more mainstream hobbies.

“When specialist re-enactors and demonstrators go into schools to pass on their knowledge to primary youngsters it is a great time to teach them about history, and they appear to be more enthusiastic and want to learn more when they get such hands on experiences.

“But even teachers admit they can learn more about history from such events.

“We had one visitor to a recent event who was a teacher, who said she’d learned more about practical history in one day than she had throughout university.”

Kids will be able to tour camps, see battle re-enactments and chat with experts to learn about Scottish history up till the First World War.

There will also be falconry displays, jesters and craft demonstrations at the two day event.

Now in its eighth year the festival has an array of events to spark the imagination of both children and adults.

Mr Topp added: “Children who want a living history lesson can come to the event and be transported back in time, where they can experience history almost as it happened.

“They’ll be able to learn about our history in an authentic yet fun and entertaining way.

“They will experience the sights, sounds and smells of history. The Festival is not just about the battles, but also gives the visitor an insight into how our ancestors lived.

“They will be able to walk through large, colourful Living History camps, meet the re-enactors, and learn more about how these warriors lived, dressed and cooked.

“Visitors can talk to re-enactors about their chosen period of history and the characters they portray.”

More information on the festival at Lanark Racecourse on August 21 and 22 can be found at www.lanarkmedievalfestival.co.uk