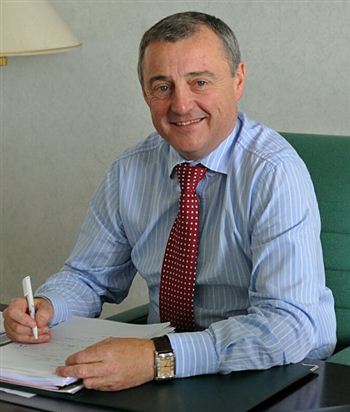 SCOTLAND’S newest fire chief claims a merger of the country’s fire and rescue services is “inevitable”.

Jimmy Campbell, who took up his post as chief fire officer at Lothian and Borders Fire and Rescue Service last month, believes the move is a foregone conclusion in the face of savage cuts to public spending.

His call for as little as three super-brigades covering large areas of Scotland reflects concerns that the current system of eight forces is unwieldy.

He said: “At present we do things eight times over – eight Chief Fire Officers, eight sets of senior management, eight sets of back office support across a range of jobs, personnel and IT to name but a few.

“If we look at the number of fire and rescue services in Scotland there must be a better way of doing things.

“I believe that it’s inevitable that at the end of this four year period of budget cuts we will not have eight Fire and Rescue Services across Scotland.

“They will have been merged perhaps to three, covering the West of Scotland, South East and the North.”

Lothian and Borders Fire and Rescue Service could lose up to £12 million of funding, with a merger with Fife and Central services a possible outcome.

There also remains the possibility of a single fire service for the whole of Scotland, as was the case during the Second World War.

Against the backdrop of swingeing cuts to public spending – and a decreased number of fire deaths in Scotland in recent years – Mr Campbell said the move would make sound financial sense, calling for a “total reorganisation”.

He said: “We don’t know at this stage what cuts will be expected in services like ours but with commentators speculating on cuts from 12 per-cent to as much as 25 per-cent we know these cuts will be significant  – and there is no way that cannot affect how we currently do business.

“I am seeking a national approach from the fire and rescue services’ Chief Fire Officers to establish a realistic direction and course of action that fundamentally protects our frontline firefighters and maintains the quality standard of services that the people of Scotland have come to expect.

“At present our services match the set up at local authority level and that is also reflected by the number of police forces and health boards in Scotland.

“Perhaps at government level there is a need to look at a total reorganisation to find a more effective way for agencies to work together, and in particular how back-office services are supplied.

“There has been much good work done by the fire and rescue service in the past few years to reduce fire deaths across the country by around 25 per-cent.

“It is critical that any changes we make do not affect frontline services and undo this excellent record that has contributed to making Scotland a safer place to live.”

He added that fire service staff costs would have to be addressed as an urgent issue – but not until the full extent of the cuts are unveiled on 20 October.

He insisted essential fire-fighting and road accident response services should not suffer because of budget cutbacks.

He said: “In Lothian and Borders 84 per-cent of our gross expenditure is in staff costs, this will be replicated in other fire services.

“If we are to deliver savings of some 20 to 25 per-cent as some suggest, sharing back room services alone will not give us the required savings.

“We need to be in a position to fulfil our duties under the Fire Scotland Act which includes a firefighting capability, response to road traffic collisions and a fire prevention role.

“For fire crews to carry out this work they need back office support, people to pay them, ensure they have IT support, take the calls for emergency assistance to name but a few.

“At present we don’t have the answers because we don’t know what level of budget cuts to expect and we await the outcome of the spending review.

The sooner we can confirm what will be taken out of our budgets the better – at present the uncertainty hangs over us all in the Fire Service.

“We must continue to provide the best public service we can, but remain very uncertain about the future.

“All we do know is that we face an unprecedented level of change, although I still think we provide a fantastic service.

“In the past four years we have worked hard to continuously improve on what we do, but this good work could be undone if cuts harm our frontline service.”

He also highlighted working with young people to combat anti-social behaviour as a valuable scheme that could be under threat.

He said: “It is very likely to have knock-on effects on some of the work we do in areas like youth engagement and the likelihood is that the youngsters that currently benefit from these types of very successful schemes will miss out

“That in turn could have an effect on anti-social behaviour and more generally the relationship that exists between the service and various section of the community.

“I will be looking to work closely with other Fire and Rescue Service chief officers and with our trade unions as it is they who will play a key part in helping us to achieve a solution.”

Firefighters tackle fires in their own stations too

Student march to Scottish Parliament in protest against tuition fees