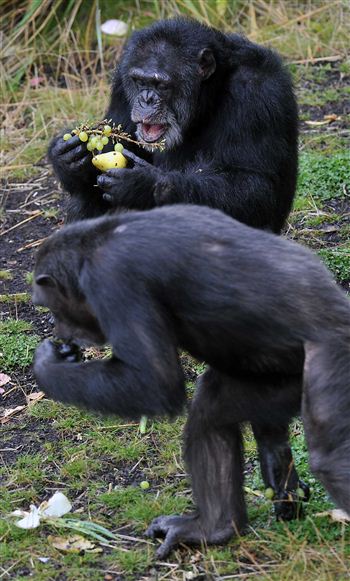 TWO parties of chimps at Edinburgh Zoo have merged in a bid to discover who is the top banana in a new enclosure.

And with genes which are 98 per-cent the same as humans, the new chimp alliance has been negotiated nearly as carefully as the one in the House of Commons.

Not dissimilar to the Tory and Lib Dem government, keepers say the two parties living in the Budongo Trail enclosure appear to be settling in without too much in-fighting.

The 11 resident chimps at Edinburgh Zoo are joined by a new group of primates from Holland’s Beekse Bergen Safari Park.

Keepers from Edinburgh conducted a carefully staged integration procedure to ensure that the delicately balanced chimp community was not disrupted by the newcomers.

Head Keeper Jo Richardson said: “It’s not far off Westminster, the alpha males build allegiances and support amongst the group and they rely on this to retain their position as the dominant animal.”

But the key candidates are the Edinburgh group’s dominant male Qafzeh, and the alpha from the Dutch pack called Claus.

Jo said: “It can take months to sort it out because the internal relationships are so complex. 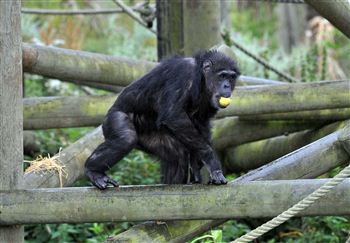 “In the wild the animals would exhibit behaviour called fission and fusion, where they would break into smaller groups for as time, each with its own power structure, then occasionally come together again as a large community.

“It is important for the success of the integration to know individuals well as chimps have a lot of group politics and social dynamics, and are an extremely intelligent and volatile species.

“Our resident chimps have distinct characteristics and we completely understand their status in the group.

“But when you bring in a new group this has to be handled in the right way to ensure that no one’s’ status is challenged initially as the two groups come together.

“So you start with those with the lowest status then gradually progress up the status ladder until you get to the highest level and those being the alpha males.

“This is done at the chimps’ pace to ensure all group members have a chance to settle and integrate well with hopefully minimal aggression, as chimps will sort out hierarchy and dynamics through both affiliative behaviour and sometimes fighting.”

The merger is the largest integration of chimps ever undertaken in the capital’s zoo.

Speaking about the potential personality clashes, Jo said nobody knows whether alpha males Qafzeh and his challenger Claus will work together or fight.

She said: “So far they have given each other a wide berth but over the next few weeks as the groups start to settle into one, it will be interesting to see how the dominance struggle between these males plays out once the group dynamics stabilise.

“Already we are seeing allegiances change and strengthen as chimps from both groups start to integrate.”

Edinburgh’s Budongo Trail enclosure is one of the largest of its kind in the world.

Originally from Beekse Bergen Safari Park in Holland, it is hoped that the 11 new chimps will be an important part of Edinburgh Zoo’s captive breeding programme.